Toruń, Poland, home of Nicholas Copernicus, is one of many European cities that claims to have invented pierniczki, Polish gingerbread cookies. One story goes that woman had consumed a little too much mead and made the happy mistake of adding honey and spices to bread she was making.

The city, which is one of the few in Poland not damaged during World War II, even hosts a Gingerbread Museum. When we spent the night in Toruń on a Thanksgiving road trip, the hotel left individually wrapped gingerbread cookies on our pillows. 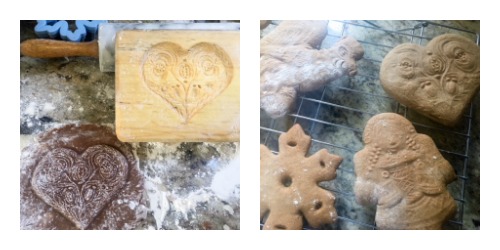 After seeing the beautiful gingerbread figures available at most festivals in the Stary Rynek (Old Market Square) in Poznan, I wanted to buy some wooden gingerbread molds to bring home with me. They’re not easy to find. I found my first at a gingerbread shop in Gdansk (they only had two and my friend bought the other for her daughter), subsequent wooden molds were purchased at a wonderful souvenir shop in Toruń (I wish I had the address), and finally. . .

I bought a large reversible mold (a man on one side, a woman on the other) in an antique store in Amsterdam, so I guess technically this one would be a speculaas mold. I think the large size be striking to use in holiday decorating. 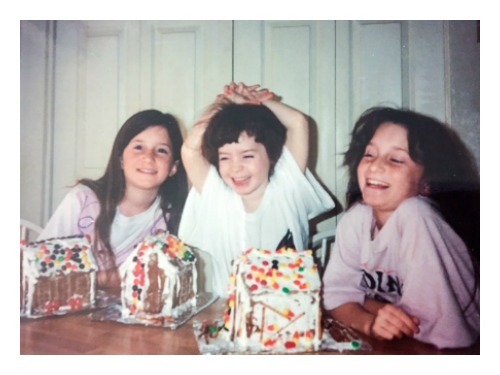 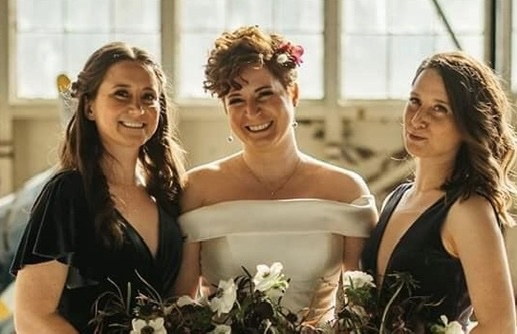 I’ve made gingerbread in the past. I used to make three gingerbread houses every Christmas for our daughters to decorate. My American recipe uses molasses. The Polish recipe I used for inspiration, from Moje Wypieki, uses honey and is a little softer than what I’ve worked with in the past.

The finished texture is light and lovely. One change that I will make next time is to reduce the baking soda. I hope with less leavening, the details from the mold will be more distinct after baking. 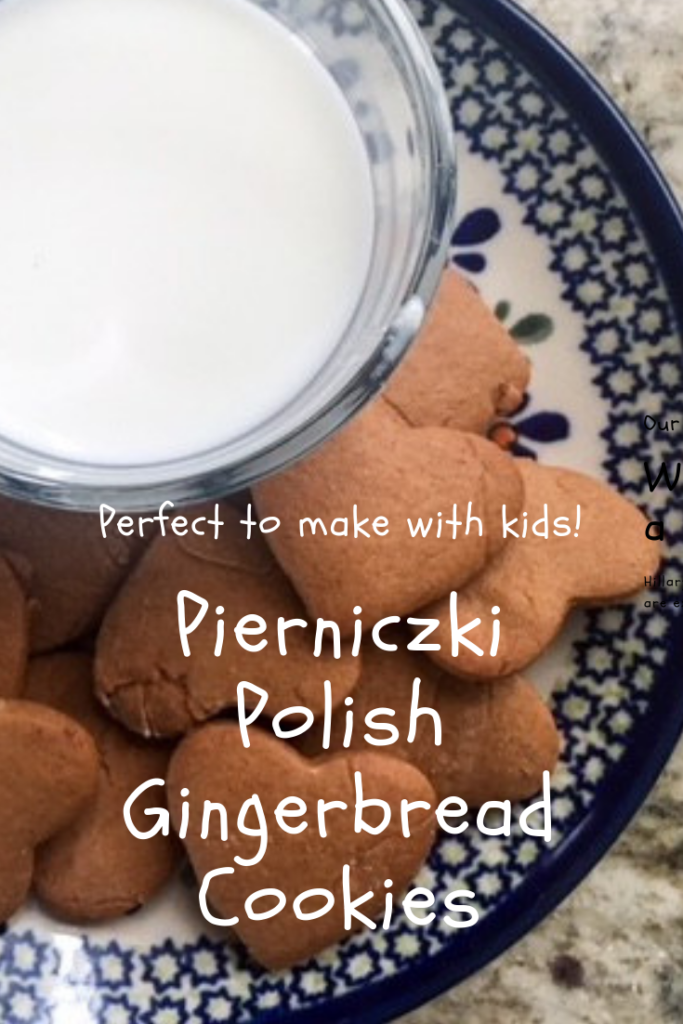 I trimmed the pattern before baking, using a combination of a pizza cutter, a little pasta cutter, and the corner of my metal spatula. My royal icing piping isn’t precise enough to accent the lines in the molds, so Ed had the good idea of spreading icing on the relief and then wiping it off, almost as if I were antiquing furniture. It highlights the pattern better. I may also leave them plain in the future. 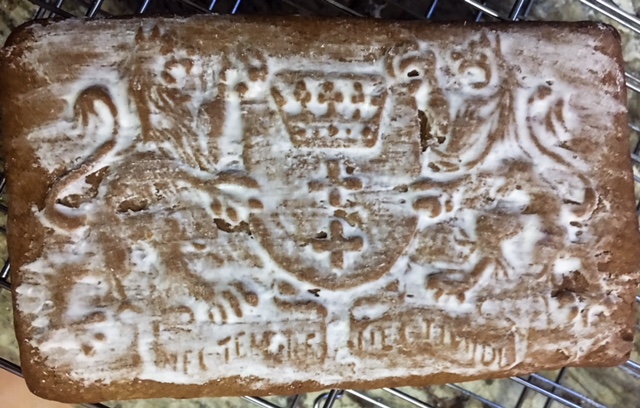 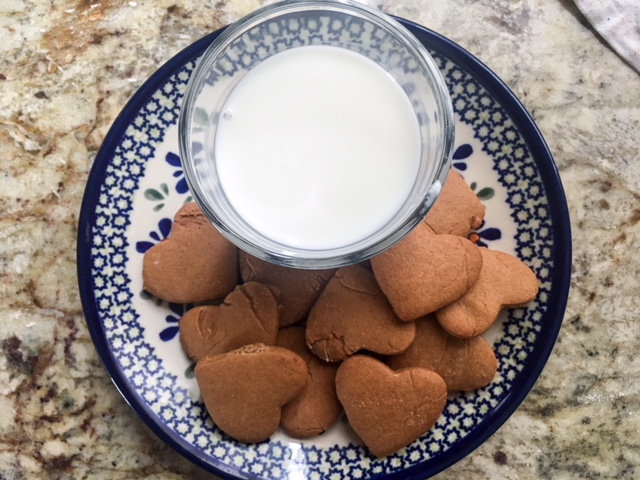 In addition to my wooden molds, I tried out two large Christmas cookie cutters and made a bunch of little hearts. I piped a little royal icing on the larger cookies and the molded gingerbread, but I left my little hearts plain, but you could certainly sprinkle them with coarse sugar or sprinkles before baking, or coat with a thin glaze after baking.  Traditional pierniczki should look rustic, not too perfect. It would be a great baking project for kids. 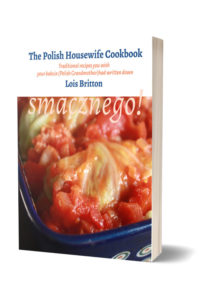 This is one of the 54 recipes in my Polish cookbook. Available on my website and on Amazon!

Pierniczki for Valentine’s Day too!

While Pierniczki is a traditional cookie for Christmas, it appears at other times of the year too. It’s a favorite treat for decorating and adding piped sentiments for all kinds of occasions, Valentine’s Day or Walentynki, Dzien Kobiet, 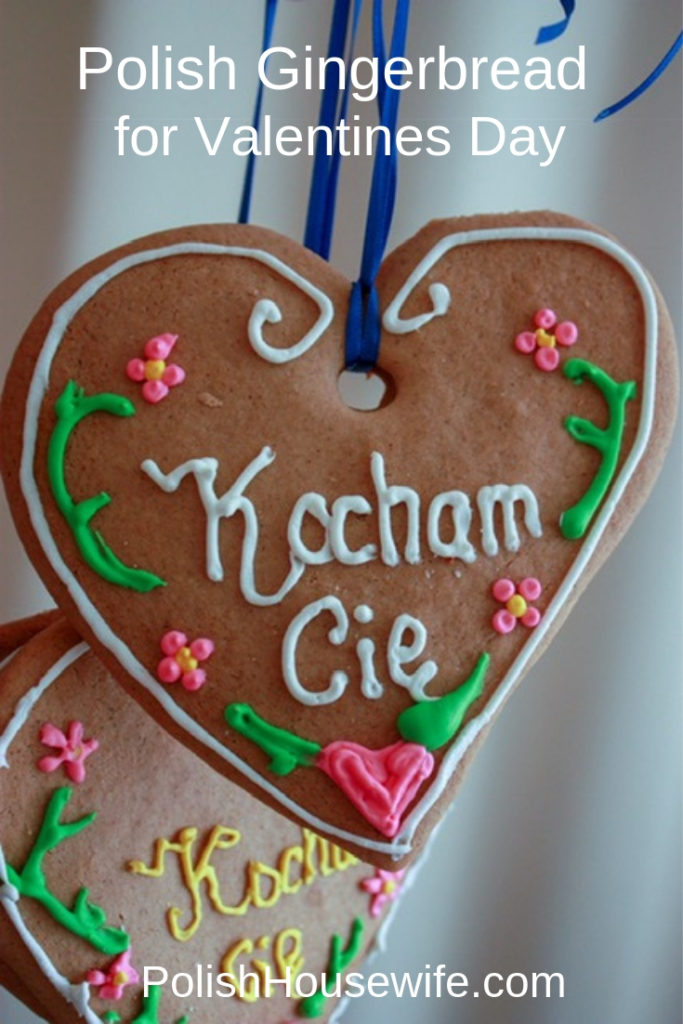 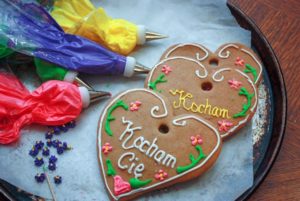 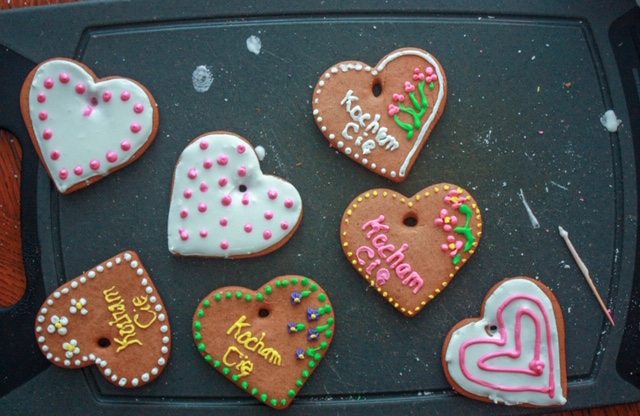 I’ve just done some with Kocham Cię (I love you) for Valentine’s Day. It’s a simple royal icing tinted with Wilton gel colors.

PS – There have been some comments that people have found this dough too dry and crumbly. Check the recipe note and trust your instincts. If it seems like the dough is becoming too dry, stop adding flour, and spoon or two of water until your dough is soft and pliable.

A couple of readers have had trouble with the dough being too crumbly, a sign of too much flour or too little liquid. Measure carefully, and you may want to add the flour gradually, stopping before it becomes difficult to work in the flour. The dough should be soft and pliable.