There are little pockets of Thanksgiving celebration around Poland.  In Poznan, Credo, a restaurant we enjoy, offered up the traditional fixings on the holiday.  The Nazarene church shared a Thanksgiving meal with their Saturday evening worship with thanks given in English, Polish, and Russian.

We took to the road – piling into our minivan with three other Americans from Ed’s office and Benson (our dog).  Looking back the theme of our trip could have been Copernicus, granaries, and gingerbread.  We left Wednesday afternoon, making our first stop in Torun.  Our hotel, a former granary within the walls of the medieval old town had a terrific restaurant complete with fireplace, polka band, and smalec (pronounced smalitz), rendered pork fat that’s eaten with bread rather than butter.  Individually wrapped gingerbread cookies were left on our pillows.

The old section of Torun is beautiful and small enough that you can easily see everything you want on foot, but remember we walk a lot.  Besides being the birthplace of Copernicus, Torun is one of many towns claiming to have invented gingerbread.  One legend that we came across said that a housewife used honey in her bread rather than starter one day after a little too much mead.   There’s a gingerbread museum where you can bake your own in a wooden mold and a gingerbread store on every corner.   I’ve baked more than my share of gingerbread houses when our daughters were young, so the baking wouldn’t have been a novelty to me, but I was keeping my eye open for a wooden gingerbread mold without luck. 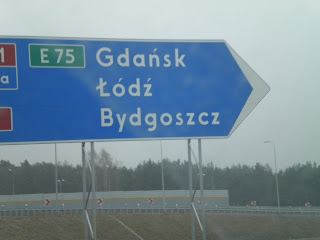 We stopped by Kona Coast  Cafe before we left town on Thursday.  The cafe is owned by John (American) and his wife Magda (Polish).  They roast their own beans and the coffee was so good that we bought a bag of beans to bring home.  We learned from John  the A1 highway to Gdansk was open, news that took more than an hour off of our drive that day.  🙂

We checked into the Gdansk Hotel, a former granary, with a breathtaking view of the city.  We had Thanksgiving dinner at a restaurant that specialized in pierogi – 20 varieties on the menu.  I had a sampler plate and chose four different kinds – mushroom, potato and cheese, sweet cheese and fruit, and chicken with nuts and raisins.  The food was fine, but I realized that there’s a reason some combinations are classics.  The chicken-nut-raisin pierogi just weren’t memorable.

Friday, we drove to Malbork Castle, completed around 1300 AD, it’s the largest brick castle in the world.  We had a English speaking guide who spent a couple of hours showing us around.  She mentioned that Copernisus frequented the castle, pointed out the section that had been the granary, and went on and on about the toilets:

In two hours, she told us many other things, but you see what sticks in my mind. That, and the kitchen – the heart and soul of a home, even in a castle. 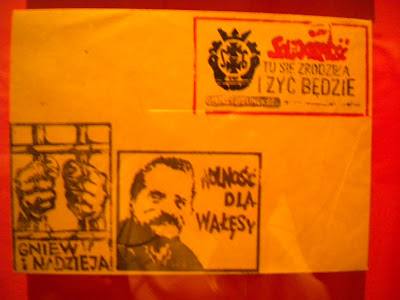 We spent Saturday wandering around Gdansk.  We visited the Solidarity Museum with reminders about life in Poland under communist rule and learned about the beginning of the end.  We all remember Lech Walesa, Solidarity leader and former president of Poland.  I now know that English speakers have grossly mispronounced his name (Vawensa would be closer).  His estranged wife, Danuta, has just published her memoirs – her side of their life together.  I hope it comes out in English.  I love this quote from the Christian Science Monitor review of her book, “We had crowds of labor union members, advisers, politicians, journalists and lunatics pouring into our apartment from dawn until late at night.”

With the sun low in the sky at 3 PM, the men in our party settled in Restauracja Republika, a sports bar, for beer and football while Janet and I visited the amber shops and a gingerbread shop located in what used to be the home of Copernicus’ mistress.  Here, I found a wooden gingerbread mold! We ended up staying at Republika for dinner.  I ordered the cod, but when I had a bite of Ed’s burger, I knew I’d made a mistake.  Their burgers are extraordinary – worth the drive!

We hurried home on Sunday, only a 4.5 hour drive with the new highway, to make it to the Lech Poznan match that evening.  You’d think our dedication would motivate them to score, but no, a 0-1 loss.

It was a wonderful trip.  Stateside friends and family, you should be visiting! You’re missing out on Europe’s best kept secret.