When I first visited Poznan in 2009, there was a countdown clock in the old market square, ticking off the minutes to the first match of Euro 2012. Euro is a European football championship played every four years, it happens in between the World Cup; every two years one of these major events is happening.

It was a big deal for Poland. Soccer stadiums were built and remodeled, new motorways crossed the country, all to accommodate the visiting football fans. The hope was that Poland’s European neighbors would see the country in a new, positive light and return again for business and pleasure, and I saw that happening in the years following 2012. We’d be at a festival in the old square, and end up sharing a table with others who were speaking English.  Usually a Irish couple, there on holiday after he had visited during Euro.

The national teams from Ireland, Croatia and Italy played in Poznan. Fans from all three countries filled the hotels and campgrounds. It had been SO long since Ireland has qualified for Euro or World Cup that more than one fan told me they had promised themselves they would be there for the next one, no matter where it was. 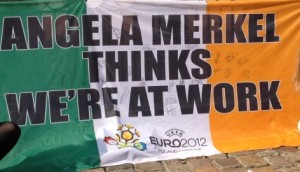 The Irish national team had the worst performance in our group on the pitch. They were quickly out of competition, but their fans were the best! They were so loved that the city hosted an appreciation rally for them in the Stary Rynek. They said it was for all the fans, but the focus was singing the Irish football songs, that we’d heard all over town, at all hours of the day and night, back to the fans. “You gotta love the Irish. . . You’ll never beat the Irish.” It was easy to learn the words. The national teams have played friendly matches since then, in both countries, I believe.

I was an English speaking city volunteer in the Poznan fan zone. My interactions with the other national fans were limited. my friend, Caroline, and I gave directions to Italian fans inquiring about the nearest supermarket while we were out on our bikes. A Croatian fan in the fan zone was annoyed that he had to ask me a question in English, a language he spoke very well, but he wanted to know why there were no Croatian speaking volunteers. An interesting point, but I suspect there were no native Croatian speakers who had come forward to volunteer in that capacity.

It’s exciting to see Poland playing well in the qualifying matches for Euro 2016. Robert Lewandowski continues to be a national hero and make a kazillion złoty in TV ads. Poland tied Scotland. As I recall, last time around, they only made it into the competition because they were hosting. The next match is with Ireland.

I’ve delayed in posting this, Poland qualified for Euro 2016 over the weekend, beating Ireland 2:1.