We finished off our English only training with a dinner at our place the night before Euro 2012 was to begin and our volunteer group would be on different schedules and sent off to different areas – the stadium, the fan zone, or serving as translators in the media center and police station. 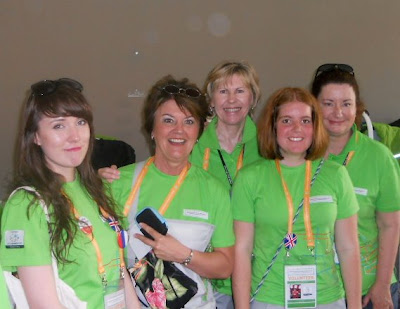 The first day was exciting to see.  Janet and I, who were working the in the disabled area of the fan zone (an elevated platform shared with the media, a lovely spot shaded by a large tree), were able to see the crowd without being in it.

They closed the gates when the crowd reached 30,000.  Ed was number 50 in line when that happened, so he had to watch the first match at The Dubliner with a lot of new Irish friends.  I caught up with him there after my shift.  The brave Irish souls who journeyed to Poznan were pleasantly surprised to find it to be a safe and welcoming city.  They said their local media had been imploring people not to go to Poland because it was full of neo-Nazi skinheads who would like nothing more than to beat up on Irish fans who had had one too many.

It’s good advise to stop long before you reach the point when you can’t take care of yourself; otherwise,  you might as well tattoo victim on your forehead no matter where you are.  The Irish thought it was a hoot to run into Americans in Poland and they wondered what we made of this media scare tactic after living here for years.  It would be naive of me to say there is no prejudice in Poland; they are human after all.  This is also a very homogenous population without a lot of opportunity to get to know people who are different from oneself, but that is changing.  I don’t think  white supremacists have a bigger presence in Poland than in any other country, a VERY small fringe group that usually gets no attention at all.  Let face it, if the news isn’t sensational  enough, the media, in any country, will try to make something sensational.

I’m not working today, day 2.  So I’d like to visit the fan zone, to scout it out a little better than we were able to do in training (that part was all in Polish).  Sunday I will be working the bleachers and I know they got a lot of questions there, about where is. . . the WC, the ATM, the snack bar.

Curious about the schedule of matches and the outcomes?  You can find it all here.