I’ve boasted before about having a PhD in sangria. 😉 During the four years we lived in Spain, I sampled sangria all over the Iberian peninsula. It was all made with red wine, never white sangria, and it bore no resemblance to what you’ll find bottled and sold in the United States as sangria.

I hope you’ll forgive my ego on this matter, but people rave about my sangria, and 6,000+ have saved it to their Pinterest boards. Last week, I decided it was time to step outside of my traditional comfort zone, and I made a batch of white sangria for a family gathering. 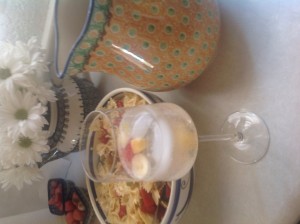 I’ve realized lately that the Spanish cuisine I know is dated. I know what Spanish food was in the 1980s. A lot of innovation has taken place since then. When I google sol y sombra, a traditional after dinner drink from the 80s, I see that now resorts are offering sol y sombra as a frozen drink — perfect for sipping poolside or longing on the beach. **sigh** Change is the only constant.

Making sangria is a lot like preparing a soup or a salad. Exact proportions and specific ingredients aren’t necessary. You have some leeway to use what’s in season or what you have on hand. In my tradition version, I almost always include some kind, or possibly many kinds, of citrus, and I add triple sec to the wine.  I like to use a mix of sparking water and lemon-lime soda because it most closely approximates the gaseosa that everyone used in Spain, but you could finish it off with either one of these fizzy options on its own or even with ginger ale.

This time for my white sangria, I used no citrus, and switched to peach schnapps to add to my cheap white wine (I found Tisdale Pinot Grigio at Sprout’s for $3 a bottle). I wouldn’t make sangria with bad tasting wine, but when you’re adding, fruit, liqueur, sugar, and soda, the finer points of a wine are lost, so why pay for them?

Here’s the recipe for the white sangria I whipped up. I love to hear how yours turns out!