I have resisted making pickled beets. So often in the United States, pickled is the only way we know beets. That may be why most Americans are not fans of the lovely root vegetable. I came to love beets while we lived in Poland. We had them in soups, roasted, in salads, in galettes. I’ve been growing beets, a candy cane variety. They’re very pretty, but I don’t know that I’ll plant these again. The less intense color seems to mean less flavor too.

With a a couple bunches of my candy cane beets still to harvest, I found a recipe in the Septemeber 2012 issue of Bon Appetit for pickled vegetables. I liked that they used some herbs and spices in the pickling liquid. I started with their recipe and bumped it up a bit. 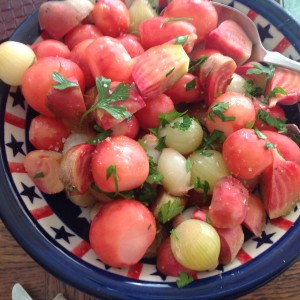 So so this is how my mom, my sister, and I spent the afternoon. Picking beets, cleaning beets (my sis will vouch for what a chore that can be), and preparing this tart, colorful side dish.

This pickling liquid will be used again, maybe on just radishes. I think they’ll make an interesting garnish.

For a stronger pickle, refrigerate in picking liquid overnight or up to one week.