Hacienda del Sol is a Tucson institution dating back to the late 1920s. Originally built by the Murphey Family and remodeled by well know architect Jossler; the hacienda used to serve as a girls’ boarding school for young socialites. The Murpheys also commissioned Jossler to build a small church on their land. The church which held it’s first service on Christmas Eve 1936, is now St. Philip’s In The Hills Episcopal Church, a local landmark. There is a footpath between the hacienda and the church. I’m told that the girls used to riding their horses to the chapel on this path. You can still see what appear to be hitching posts in the plaza area outside the church, now occupied by a labyrinth.

A few years ago, I had two friends in Poznan who both had children being married at Hacienda del Sol, one year apart. The hacienda is now a notable restaurant with guest cottages (more are being constructed as I write). 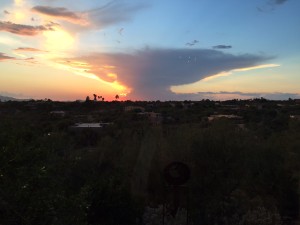 How’s this for an spectacular view and cloud formation?

I noticed that they had an amazing summer special going, a three course meal for two and a bottle of wine for $86, so I decided that this was where I would take Ed for his birthday a few weeks ago. If I’ve whetted your appetite, sorry, the summer special seems to have ended, but watch for a similar offer next year. There are bargains to be had by those who tough out the summer here, or just splurge on the normal-winter rates. Any meal at the hacienda becomes a special occasion. 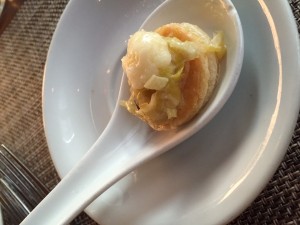 Our meal was so enjoyable. If you’ve been to the hacienda, it goes without saying that the food and the service are excellent. When we discovered that our sommelier’s parents were Polish immigrants from Zakopane, it added another level of connection and conversation to our evening. The wine we chose as part of our package normally sells for $60. That’s more than we would spend on a bottle of wine, so I’m glad we got to sample it in this setting – very smooth. I’ve added it to my wine app, Delectable. That’s what started the conversation with our sommelier. I asked if he used an app to keep track of wines and things just flowed from there. 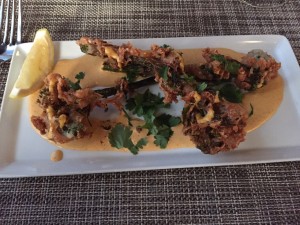 Broccoli battered and deep fried, served with a chipotle aioli. If kids all over the country were served this, vegetables would have a new reputation!

One of the things I noticed that I shared with Ed on the way home was the pace of the meal. It was perfect, European in nature with just enough time in between each course. 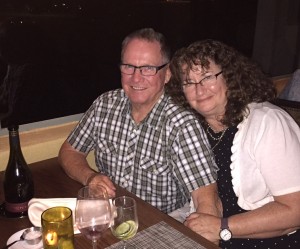 In comparison, we ate at a well known steak house near our home for our anniversary in December, just after we’d returned form Poland. The food was fine, simple American fare which they prepare well. This location used to be a stop on the old Butterfield Stagecoach line. I think the locals will know the one I mean. I felt so rushed! And there was no reason for it. The restaurant was never more than half full.

Every course arrived before the previous one was finished. You need time to breathe and relax while you’re eating. Don’t ask if I want dessert while only half way through the entree! And don’t leave the check on the table when you bring the dessert. We’re not sitting at counter in a diner.  I started to write a blog post about it then, but I thought you’d think there was no pleasing me. In Poland, I’ve complained about a lack of customer service, almost non-existent service in restaurants– how you must ask for the check when they clear the last plate or you’ll sit there all night trying to get their attention again. Now back in the USA, I feel that I’m being rushed, hovered over, too speedily attended to.

So that my report for today. One great meal and one pet peeve. What’s your restaurant pet peeve?