December in Poznan has a lot to offer. A definite highlight is the International Ice Carving Competition that takes place on the second weekend of the month. 2018 marks its 13th year, the only event of its kind in Europe.

Hosted in the Old Market Square, the medieval heart of the city, locals and tourists can enjoy an up close and personal look as enormous hunks of ice become temporary works of art. How long the ice statues last depends on the weather. With mild temps, above freezing, it may only be a few days. Some years, that’s not a problem. They could almost become semi-permanent.

The competition coincides with the Bethlehem Market, which takes place in the Old Market Square (Stary Rynek) and Freedom Square (Plac Wolności). Bethlehem Market, like other European Christmas Markets, includes, vendors selling all kinds of holiday goodies, concerts, traditional Polish food, and beautiful Christmas decorations. Wandering through the square with a cup of hot mulled wine, grzane wino, or believe it or not, hot mulled beer, grzane piwo, is a fun way to take it all in.

It is interesting to see the variety of tools used: chain saws, electric sanders and grinding tools. irons, and kettles of hot water. More than 20 competitors from around the globe compete annually in the two-day event. Day One involves speed carving, and on Day Two, 2-man teams work on really grand creations. They’ll be illuminated with colored lights at night and cash prizes awarded to the winners. 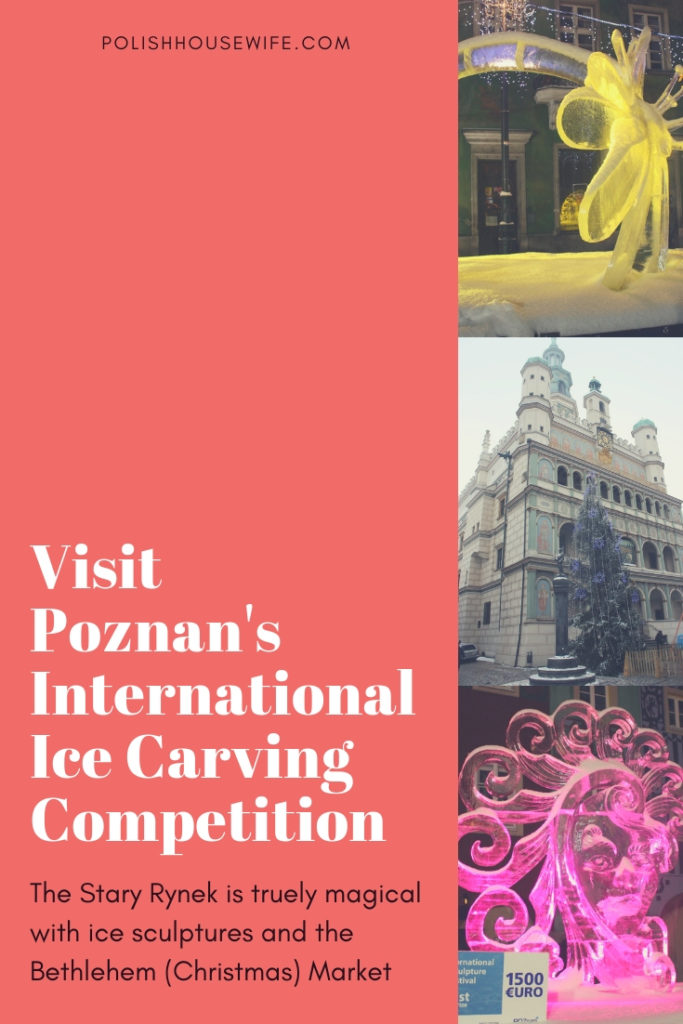 A chat with one of the American ice carvers revealed that he is a chef who had done ice carvings for special events in his restaurants.  Now, rather than cooking, he travels the world competing in competitions like this one.  After Poznan, the next competition was slated for Canada, with the largest competitions in Alaska.