Every year the pilots at the air base choose the Pilot of the Year.  The honoree then plans the celebration party.  The entertainment seems to vary from year to year depending on the chosen pilot’s interests.  Last year the entertainment included opera singers and a DJ playing techno music – very diverse interests. 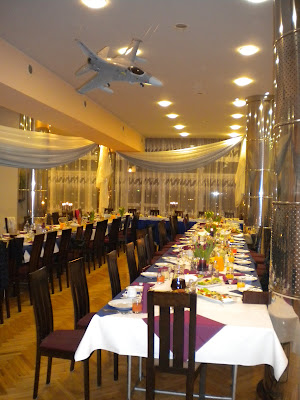 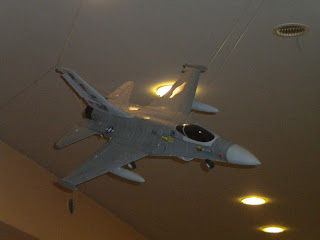 Ed got to attend the ball last year, before I moved to Poland, so I was excited to be here for the 2011 bash.  The ball is held at a military recreation facility northwest of Poznan, just outside of town really.  The banquet hall was beautifully decorated, complete with F-16s overhead.  we arrived about 8:30 PM by cab.  Drunk drinking laws are so strict here, that you don’t drink anything if you have to drive.  Knowing the evening would include more than one toast with the a shot of vodka, a cab seemed wise.  The driver had a little trouble finding the place, even with the front seat passenger giving directions from his phone gps.  We worried about a cabbie being able to find the location on his own when we were ready to leave, so we asked this driver to return for us at half past midnight.  He agreed, and we crossed our fingers.

There was coffee and tea service on one side of the room, draft beer set up on the other.  The only thing missing was water!!!! I would have given anything for a bottle of water, but there were none to be found, and I seemed to be the only one who was missing it.

The entertainment included professional ballroom dancers who danced to a few songs and then pulled the Pilot of the Year and wife out on the floor.  They did themselves proud.  Ed and I gave it a try and realized that we’ve lost everything we gained in our dancing lessons last year.  You have to practice! 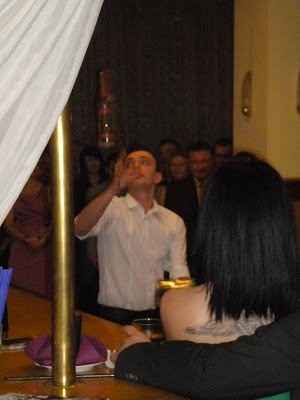 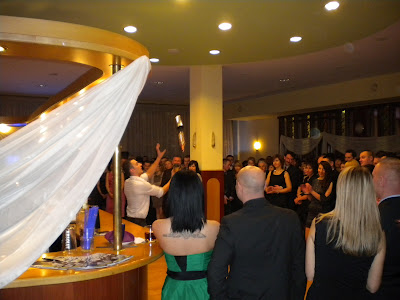 The  next bit of entertainment was our friend Remi, who put on a flair demonstration.  Flair if you’re not up on the term is the juggling and balancing of bottles, shakers, and glasses while preparing a drink.  Remi and Agnieszka prepared beautiful cocktails. 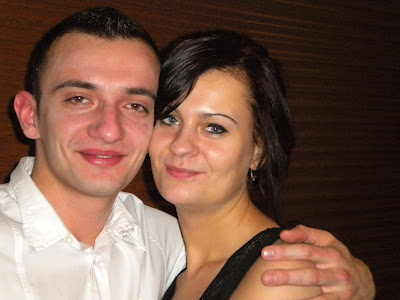 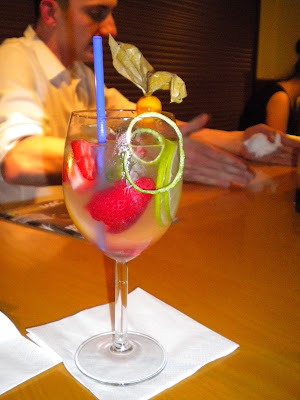 And that’s where we left them at 0030.  Our cab arrived just as the cake was being served, and people kept saying you’re leaving so early?  Everyone else kept partying until about 4 AM (there were rooms available for everyone) and had breakfast together before they left.  What a great tradition! 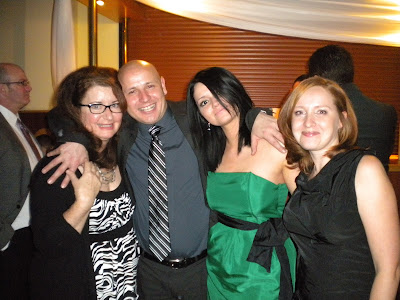