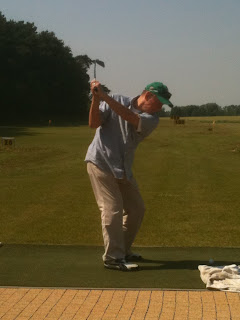 We’ve been to the driving range at Hotel Solei a few times recently. Even if you’re not hitting balls, this is a great place to hang out. My husband is an avid golfer, so I’ve seen a lot of driving ranges in my day; this is the nicest one we’ve come across. 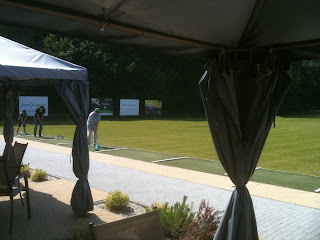 From the golf side, this is one of two driving ranges within two hours of Poznan, and wouldn’t you know they’re both on the same side of town (not our side). Golfers are hitting from a state of the art artificial surface. The only down side is that the range is not particularly long and the end doesn’t have a net. While it improves the view, I’m sure that knocking their range balls into the surrounding wheat field would be discouraged. 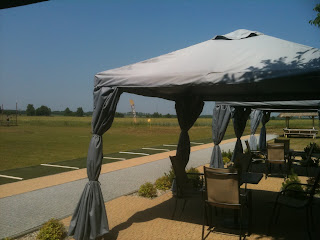 As for the aesthetics, the hotel is just outside of town, near a lake. The driving range is bordered by forest on one side and wheat fields on the other two. Behind the hitting area, is a row of gazebos complete with tables and chairs. The wait staff from the hotel restaurant will check to see if you want anything, mineral water, coffee, salad. It’s a beautiful setting to enjoy a snack, read a book, or watch the golfers. 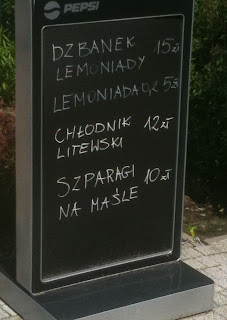 We were on our way home from the driving range Sunday and ran into long lines of traffic and detours, twice. After the first detour, we wondered if there was a special event going on. After the second, we began to suspect that there had been a big accident. We could hear a lot of sirens in the distance and were passed by three ambulances before we got home. Monday morning we found out what had happened in the New York Post, of all places. An accident took place at the Gran Turismo Polonia car show. The driver of a souped up sports car, lost control skidded into the crowd of onlookers. There were no fatalities, but many were taken to hospital.

Similar events have taken place in front of Galeria Malta, near us. I’ve been surprised by the lack of sturdy barriers. The kind used are meant to keep the people off the street but do nothing to keep the cars off the sidewalk. Let me be the first to admit that safety concerns in the United States have become ridiculous. Our propensity for law suits seem to have removed any common sense we may have had. There must be some sane, reasonably careful, middle ground.

Sad news from home this week. A crew of nineteen were killed fighting wildfires in Arizona. We can’t legislate all risks out of life. And surprising news in Poland. Foreign minister, Radek Sikorski, has confirmed that Edward Snowden has applied for asylum in Poland – not likely.