Restauracja Bazar 1838 is named after its historic building and the year construction began.   The Bazar Hotel was the center for economic and social life in Poznan when it opened in 1841 – the place for movers and shakers to see and be seen.

We’ve walked by this beautiful restaurant so many times, and we always promise ourselves that the next time we go out for a meal that we will come here.  We’ve been saying that for at least 6 months, and we finally remembered!  We stopped by here on a Friday night, Noc Kupały actually, and had an early meal before going to the river to watch our fellow Poznanians launch tens of thousands of paper lanterns into the sky. 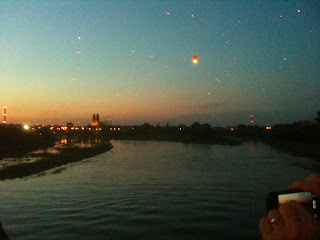 From the outside, the restaurant looks very posh, very expensive, almost intimidating.  Its decor is very nice and the menu very interesting, as Poznan in Your Pocket put it, “looking far pricier from the outside than it actually is.”  Once we braved the doorway, we found everyone was sitting on the patio that night.  One large table had just stopped by for coffee and dessert, and another was an extended family celebrating a birthday.  A young couple came in wearing what seemed to the uniform for young Poznan – a girl dressed to the nines in a very short dress and a guy in tennis shoes, baggy pants and a t-shirt.

I have to give our waiter his own paragraph.  The service was fantastic.  It was fantastic by American standards.  For Poland, it was over the top, worth writing home about.  He was personable, attentive without being intrusive, and very knowledgeable about the menu.   He was so good that you have to be careful.  The young man has mastered the art of selling up – and I don’t mean that in a bad way.  He would suggest something with the enthusiasm I would expect if we were guests in his home.  I just have to remind myself that these fun recommendations come with a price tag.

We both had starters, a salad for me, a soup for Ed.  I had planned on a braised meat (beef, I think), mainly because I was intrigued by the side, carrots cooked with anise and other interesting things.  Our waiter strongly urged me to try a steak that may have been the special that night, promising me that it would be much better.  My first response was to think, he’s been in the kitchen and must know what he’s talking about, but we’ve been watching a lot of BBC lately with Gordon Ramsey going in to fix restaurants.  I can hear Gordon telling the wait staff to push a dish, for reasons other than it’s the best.  He’s made me a cynic.

The steak was cut from the tenderloin, one of the few identifiable cuts of beef in Poland.  My main dish was OK, nothing memorable.  I’ve bought a couple of whole tenderloins in the last couple of months, and I’ve cooked steaks at home that I found more enjoyable.  Surprisingly, part of the meat was not particularly tender, and I would have liked more seasoning. 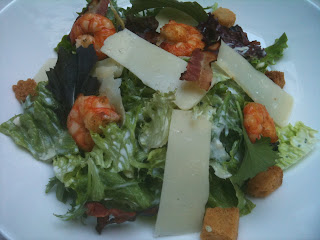 I felt much the same way about my Cesar salad.  Here’s a google translation of the description on the menu:

I’ve made Cesar salads at home and that’s just how it should be.  The only problem is that the large shavings of Parmesan are the only taste that was identifiable.  There was no garlic, no anchovy, no Dijon mustard; the croutons were just crisp bread – no garlic.  It wasn’t a bad salad, but I found it lacking.   They were kind enough to cook my shrimp well done as I’d requested.  I’m sure it bothered the chef, but that’s how I like them, very firm.

While I found this meal on the bland side, Bazar 1838 does have a lot going for it; I’m sure we’ll give them a second chance.