figs, bacon, goat cheese on a bed of greens with a roasted hazelnut vinaigrette

For most of my life, I have not been a fan of figs. I remember a eccentric church member, we’ll call her REW, stopping by my office years ago with a basket full of figs that she’d hoped to give away. When I declined, REW cut off a hunk of fig, shoved it at me saying, “taste it!” She forced me at knife point, so to speak. Despite her forceful nature, I again had to decline, explaining the the texture was too gritty for me. REW proceeded down the office hallway with her figs looking for a more appreciative recepient. 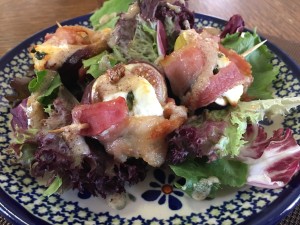 The theme of our time in Poland could be described as “try new things” or “try everything you can.” When my friends from the Poznan International Ladies Club were raving about the figs with goat cheese wrapped in prosciutto they’d sampled recently, I had to give this a try at home. If your history with figs has been like mine, let me suggest that you try them roasted. It’s a totally new experience, not at all gritty!

We began to talk about planting a fig tree when we returned to Arizona. Figs are one of the few fruit trees to thrive in our hot climate. When I mention his to my mother, she said not to buy one because they had a fig tree they would happily give us. We now have a fig tree that comes with a story. 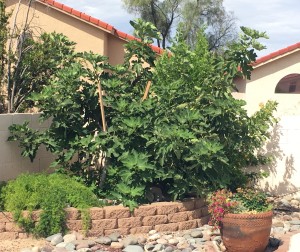 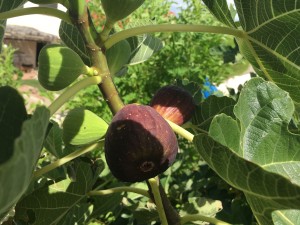 Our tree has grown from a cutting taken from one of the first fig trees brought to the area by the Spainish. The young tree was intended for the Mission Garden, part of the Rio Nuevo project. Rio Nuevo was a downtown revitalization project that fizzled out during the recent economic slump. During this delay, the little fig in a six inch pot was given to our family friend, the late Bunny Fontana. Bunny was a brilliant, charming man, but he would have been the first to admit that he was not a gardener. He said as much when he gave the six inch pot with the now five foot tall fig tree to my mother.

My parents moved the tree to a 5 gallon container and had hoped to harvest enough figs to make something similar to this dish, thinking it would be fun to serve Bunny figs from his tree. The tree grew a lot, but it never produce more than one ripe fig at a time. 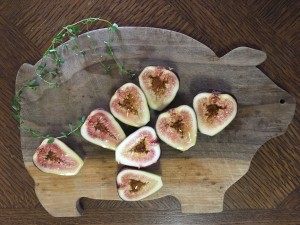 Our fig tree has been in the ground for almost two years. The one fig at a time trend continued until this summer. Now, we’re finally getting a harvest with which you can do something. This summer, we’ve had fig pastries, figs in bacon, and if my luck holds out, we might even have fig jam, a wonderful addition to a charcuterie platter.

We’ve been eating bacon wrapped figs with goat cheese all summer, but only recently added the hazelnut dressing and greens. It’s a winning combination!

Quick and easy to make these figs are a yummy appetizer or the perfect topping for an elegant salad,

The perfect topping for a green salad or try it on grilled chicken!