A month ago, I would have said that I have every attachment I need for my KitchenAid mixer. Now, I know that I also needed a grain mill! Until recently, my friend, Prethi, was the only person I’ve known with their own mill. Prethi’s is a large appliance, set up in the basement of her home. It was just like the grinding stones I’ve seen in ancient gristmills, scaled down to a table top version. On one of the many fun days I spend cooking with Prethi in her kitchen, she took me downstairs to show me the mill. It was her dry mill, I think she has a wet one too. They are necessary items in a well-appointed Indian kitchen. On the day I visited, Prethi was grinding white lentils to make flour for dosas. My kitchen is too small to devote much space for a mill, so it was exciting to see that I too can easily make my own flours with a Mockmill, a compact attachment for stand mixers. 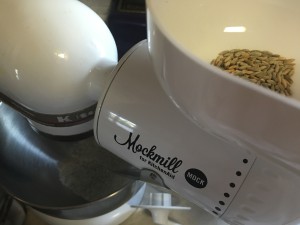 The Mockmill uses real stones, just like Prethi’s for grinding non-oily grains. It attaches easily to my mixer and dispenses flour into the mixing bowl. The coarseness of the grind can be adjusted, from bulgar for tabouleh to the finest flour. The grinding stones turn easily with no strain on the motor.

The thing I noticed as I ground rye on the finest setting was that not everything that came out of the mill was the same size. That’s because grains consist of three basic parts: endosperm, the germ, and the bran. Most commercial flour is just ground endosperm. The slightly coarser germ and bran have been sifted out. These two missing parts contain most of the grain’s minerals, vitamins, and fiber.

The Mockmill is designed in Germany by people who are passionate about eating better, much like my friend, Julie. I’ve mentioned Julie on this blog before. She sees a nathuropathic oncologist and eats very clean since her cancer diagnosis. One of the things I’ve learned from Julie’s wisdom is that it’s better to grind flax seeds right before you eat them rather than buying a box of ground flax to add to your morning smoothie or yogurt. The seeds offer the most nutrition right after they’ve been processed. While I won’t grind flax seed with the mill because of the high oil content, I have to think the optimal nutrition immediately after grinding is also true of other seeds, such as wheat berries, corn, lentils. The book Flour Power by Marletta F. Basey confirms this line of thinking. 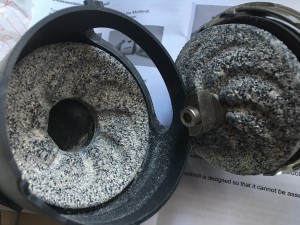 Let me share one last thought on the mill before I get to my baking project. The manufacturer mentions that it’s easy to clean. I felt like I should check that out for you. It was with much trepidation that I took the mill apart to clean the grinding compartment with a pastry brush. I needn’t have worried. It really did disassemble and go back together very smoothly. German engineering at its finest! Cleaning isn’t necessary between uses, but if you were going to pack it up for an extended length of time, you might want to, so it’s nice to know that you can.

I ordered a five pound can of rye seeds from Amazon. Intent on giving my favorite Polish Sourdough Rye Bread a try with freshly ground rye flour. The timing was right. I’ve had trouble getting a sourdough starter to “start” in Tucson. My baking buddies have suggested that the dry desert air might lead to fewer wild yeasts.

We’re in the middle of our monsoon season, so this is as close as we get to humidity in Arizona. It took longer to get my flour and water mixture cooking than in Poznan (where it happened overnight), but we finally have a good rye starter.

I used my freshly ground rye flour to feed my starter everyday and to make this dense loaf, full of sun flower seeds, just like the bread we bought at Piotr i Pawel (the supermarket closest to our flat in Poznan). 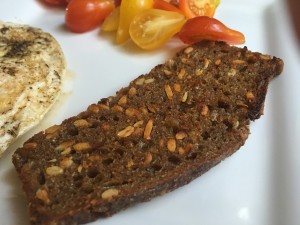 Most days, I left the Mockmill attachment on and just ground a half cup daily to feed the starter. When I wanted to tidy up, I ground enough for several days and kept the flour in the freezer until needed.

If you are a serious baker or know someone who is, now is the time to pick up a Mockmill!!!

I received product to review in exchange for this post. The thoughts expressed here are my own. This post contains affiliate links.