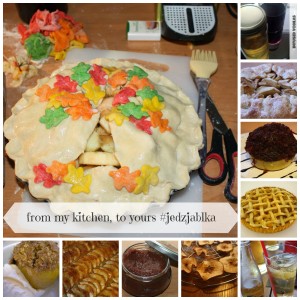 The Russians have placed an embargo on fruit and vegetables from Poland. Officially, it’s because of concerns about “public health,” but in reality, it is seen as retaliation for the European Union’s economic sanctions because of what’s going on in Ukraine.

If you’re in the United States, you may not have heard much about Russia’s invasion and annexation of Eastern Ukraine. It’s very close to home for us here in Poland. I was shocked and disappointed on a recent visit to the US that TV news spent more time talking about their own facebook page and the Kardashians than this international incident. Enough of my rant, back to apples.

Poland is the world’s leading exporter of apples, in a recent growing season, 1.2 million tons of apples were shipped aboard. Over half of those were sent to Russia.

Poland has responded with ‪#‎jedzjablka‬ (hastag eat apples), a media campaign encouraging people to not only buy and eat apples, but to post photos of themselves doing so with the hashtag #jedzjablka to protest the embargo. The selfie goes political! If you google the hashtag and check out the images you’ll see everyone eating apples, football teams, businessmen, babies, dogs – all with an apple. An article making the rounds proclaims An Apple a Day Keeps the Russians Away.

Facebook groups have popped up in the last week, such as this one, encouraging everyone to eat apples to annoy Putin. Maybe it’s because Ed was on active duty during the Cold War or maybe it’s because I remember the excitement in the Officer’s Club on a Friday night during the 1980 Winter Olympics and the Miracle on Ice, but I have a desire to annoy Putin in my own little way.  Here are 10 apple recipes (in no particular order) to help you #jadzjablka eat apples and support Poland’s apple growers.