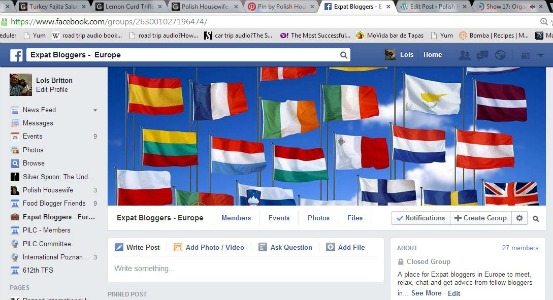 Recently I told you about the Facebook group we’ve started for expat bloggers who are writing about Europe. I wanted to share more of my blogging friends with you today. Think of this list as your armchair travelogue to learn about the food, art, history, and daily life for the locals all over Europe. It ‘s a tour you can take without a passport, jet lag, or the need for comfortable shoes. While you’re at it, how about liking Polish Housewife’s facebook page? Thanks in advance!

The European Mama — Olga is a Polish woman, living in the Netherlands with her German husband and three trilingual children. (She recently joked that they can whine at her in three languages. 🙂 ) She has lived in Germany, Canada, and the Netherlands and speaks five languages.

Eva in the Kitchen — Eva is Dutch divides her time between her home country and France. She shares her favorite recipes and favorite restaurants from Paris and her travels.

Expat Since Birth — Ute is a very accomplished multilingual mom raising her children in the Netherlands with her Swiss-German husband.

Gluten Free and Me — Linda is Swedish by birth, British by association, and has been a desert dweller (UAE) by choice until a recent move to Poland.  She and her Polish husband have two children, one of them celiac.

Joey in Poznan — Joey is a well traveled young man from Portland, Oregon. He teaches English in Poznan, where he lives with his Polish wife.

Kielbasa Stories — Chris is an American, teacher of English, living in Wroclaw, Poland. She and her Polish husband have two daughters. Her witty insight is enjoyed by Americans and Poles alike.

Kristas Random Thoughts — Krista is an American missionary and photographer who lives in Wroclaw with her husband and their children.

Moscow Munchkins — the American Munchkin family, which includes their two adopted children (from Russia and Poland),  is in the process of relocating from Moscow to the USA.

My Traveling Joys — Joy is an American pastry chef, who has come to Warsaw by way of Turkey.  We share an appreciation for baked goods and flowers.

The Nerdy Travelholic — born in Hong Kong, educated in England, worked in Poland. We met during Euro 2012 when we were both in the training for English speaking volunteers.  This young woman has traveled more than most and wrote a college paper about her experience hitchhiking from Hong Kong to Scandinavia.