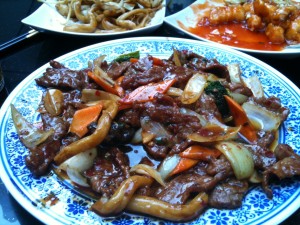 As of December 2014, Rico’s Kitchen is closed for remodeling, but you can try these and other dishes at nearby, Made in China.

We enjoyed our first visit to Rico’s Kitchen, Poznan’s authentic Chinese restaurant and look forward to trying more of their dishes. I started to say more on their menu, but there isn’t a menu! 🙂 Our waitress told us the basics of what they were offering that day and made recommendations based on our preferences.

Rico’s Kitchen is located at ul. Grundnia 9, and like many things in Poznan, you go through a small alley to reach them. I first learned about the restaurant when Rico was interviewed by our friend, Maciek, for an episode of We Love Poznan. I’ve been wanting to try it ever since.

When I was a Euro volunteer, one of my English speaking volunteer colleagues was a young woman from Hong Kong who was working in Poznan. She writes a travel blog, The Nerdy Travelholic, and has some exciting adventures to share. We met for a cup of tea one day and spend hours chatting once we got on the subject of our blogs (she shares my love of cooking too). It came up in the conversation, that she really missed authentic Chinese noodles. She said that what was being passed off in the supermarkets and Chinese markets in Poznan, was really Vietnamese. I wouldn’t know the difference, but obviously she did.

Based on my friends’s observations, Rico’s Kitchen is filling a void in Poznan’s international food offerings, and we knew that one thing we would have to try were the noodles. Our waitress told us that the portion would be large enough for two and she was right. We also had a sweet and sour (our waitress called it something else, maybe bitter and sweet) chicken, and spicy beef. I think the bigger the group the better; you could try more things.

There is a small sign on Grundnia and the alleyway is lined with red Chinese lanterns. During the summer, everyone sits outside in a small garden decorated with what I think are enormous pieces of coral. It was winter when Maciek visited, and they went upstairs to a dining room then.

Poznan friends, have you been here? 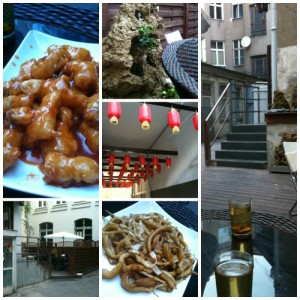