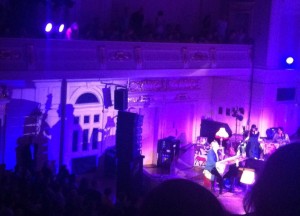 Hugh Laurie and the Copper Bottom Band played in Aula UAM, the beautiful concert venue at one of the universities  and home to the Poznan Symphony. Other than seeing Hugh Laurie sing on an episode of Graham Norton, before last night, we only knew him as Dr. House, the drug addicted, brilliant diagnostician on American television.

It was his fame as a actor that brought most of the audience to the concert. (This was his third and final performance in Poznan). He acknowledged that the audience didn’t really didn’t know what to expect. Laurie assured us we were in good hands, with the “real musicians” in the Copper Bottom Band and joked that there were some similarities between the concert lead by an actor and having your airline captain announce from the flight deck that until recently he had been a dental hygienist.

Laurie sings, plays piano and guitar, and his passion for the music he’s playing comes through loud and clear. If you’re worried that he’s not a “real musician” remember that he’s a real entertainer, and he entertains very well. It’s not a one-man show with backup band. The two female vocalists are featured prominently; the entire ensemble is first rate. As the mother of a female trombonist, I have to give a special shout out to Elizabeth Lee, the trombonist. She helped them rock the house, and I love to see a woman in that role. I got the feeling that they all really enjoyed playing music together.

It’s only natural to compare this to other, similar concerts we’ve attended in Poznan and in Berlin. My biggest gripes with the jazz/blues musicians we’ve seen at the Blue Note in Poznan and Quasimodo in Berlin is that the performers took the stage 45 minutes after the start time, and they didn’t even acknowledge the audience for the first 30 minutes — barley speaking before  it was time to take a break.  The start time on our ticket for last night’s concert was 20:00; Hugh Laurie and the Copper Bottom Band came on stage at 8:01 PM and I really appreciated their respect for their audience in doing so.

Laurie and the entire band could not have been more engaged with the audience. He invited them to sing along on a chorus and I’m sure he was surprised and pleased with the response he got. Rather than a few people halfheartedly joining in, everyone sang along, enthusiastically. When he asked the audience a question, he got answers. The photo above was taken early in the evening because everyone was still seated. That didn’t last long.

I’ve talked with our neighbors about this phenomenon regarding Polish audiences. They think it comes from a time when big names didn’t play Poland, so there is real appreciation shown to those who come here now. They said they’ve seen the same act in Poland and in Germany and the experience is totally different. Performers with an established fan base get an even bigger responses, with the fans using their forums to plan surprise welcomes as they did when Paul McCartney played in Warsaw on his 70th birthday.

If you have a chance to see Hugh Laurie and the Copper Bottom Band, do it. They put on a great show and I know you’ll enjoy it!

What’s your most memorable concert?