At 5:00 PM on August 1st, Poland stands still and silent (except for many wailing sirens) for one long minute. That conincides with 8:00 AM where I live now.

It’s become my tradition to also take a moment of silence as we all pay respect and remember the brave souls who fought and died in the Warsaw Uprising in 1944.

It began on August 1st, and was expected to be very brief. No one thought this battle would drag on for 63 days.

That belief was based on the assumption that Russian troops would offer support as the Polish resistance battled their common enemy, but Poland and Russia had differing visions about Poland’s future.

Poland pictured a western capitalist nation. Russia wanted to add Poland to their their Soviet empire. They were both connected to the allies, but you can’t really say they were on the same side.

The Warsaw Uprising was the biggest act of resistance in any country occupied by Nazi German in WWII. The heroism of the insurgents plays a key role in the Polish national identity.

If you’re ever in Warsaw, be sure to visit the museum that tells the story of the uprising. 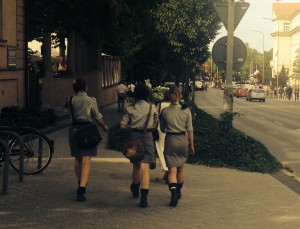 Girl Scouts on their way to ceremony

We visited the museum a few years ago, and I can highly recommend it. They have signage in English and many interviews with survivors on video that have English subtitles.

A foreigner can really get the story, but you’ll want to have several tissues with you. The story is so moving, I left more than a little misty eyed. 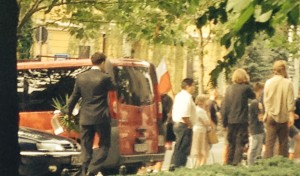 One of the most impressive things to me was the role played by he Boy and Girl Scouts in the uprising. Scouting is coed in Poland. 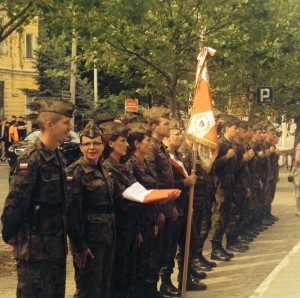 Prepared for their 21 gun salute

The Scouts ran the underground post office. Canceling the mail with potato prints. Do you remember doing that as a scouting craft?

My Brownie troop made neckerchiefs. They were using it to do a job.

They delivered the mail walking or crawling through the sewer system (that involves traveling through what one would normally expect to find in a sewer), providing communication for the resistance movement.

One young girl was working to hide and save art masterpieces. She didn’t survive. 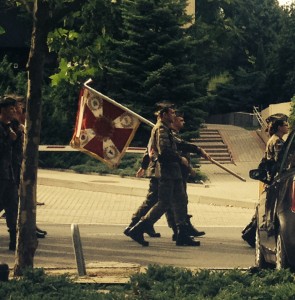 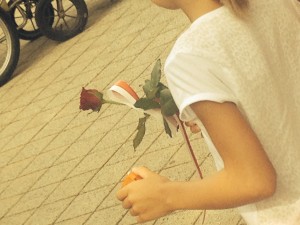 We were in Poznan for the 70th anniversary in 2014. About 300 people gathered to commentate the day, many military and public officials, scouts in uniform.

At 5:00 PM, the air raid siren sounded for one minute. There were speeches. The Polish flag was raised on a special red and white striped flag pole as the national anthem played. 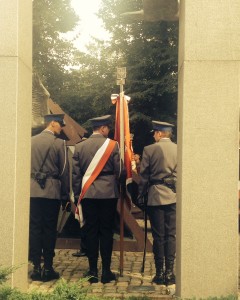 More speeches and eventually a 21 gun salute, and lots of flowers. It was a good day for florists. So many big bouquets and single flowers with red and white ribbons. 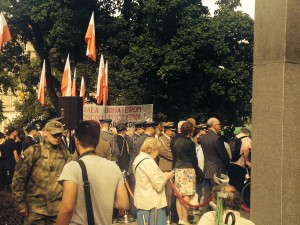 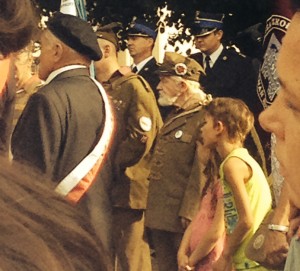 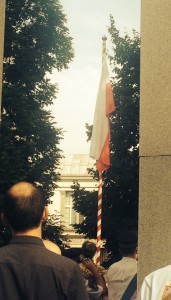 The Kotwica, the letters P and W combined to resemble an anchor, were the symbol of the Polish resistance.

They stand for Pomścimy Wawer and translate to “we shall avenge Wawer,” the Wawer massacre in 1939 was the first large scale massacre of Polish civiilians by the German troops. 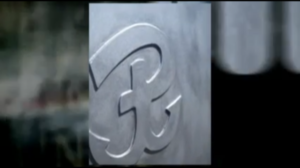