Le Cave’s Bakery, located at 1219 S. 6th Avenue in Tucson has become our daughter’s favorite place for vegan donuts. It’s so much more affordable than Whole Foods. We stopped by the other day to pick up a treat for her. As you’ll see from one of the photos below, we may have sampled a few before she got home. Our outing got me to thinking, although the I’ve heard about Le Cave’s since I was a child, this was the first time I’d ever been to the bakery. 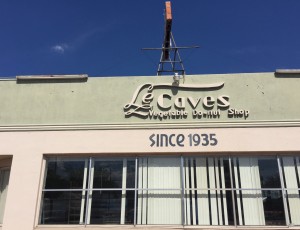 We stopped by on a Sunday afternoon (they’re open till 1 PM on Sunday), everything else in the area was closed, but there was a steady stream of customers coming thought Le Cave’s door. The bakery dates back to 1935, very old by Tucson standards. This is only 13 years after Arizona became a state, and the year before my father was born.

I remember my grandmother telling me that when my grandfather had to come to Tucson for supplies, he would often bring home a box of Le Cave’s donuts. They were ranchers in SE Arizona. So in her mind, Le Cave’s was the go-to bakery for special occasions. I remember that birthday or graduation parties she hosted always included a cake from Le Cave’s. 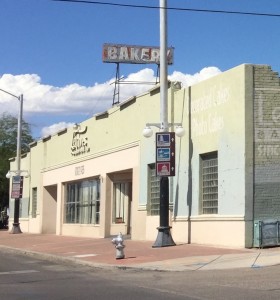 That still holds true. The two families in front of me in line were ordering a cake for a baptism and picking up a cake. It’s not just a donut shop.

The storefront is open and spacious offering a lot of room for queuing up and a dated (or retro depending on your point of view) industrial look. I’m guessing that it hasn’t changed much since it opened in 1935. If it works, why fix it? 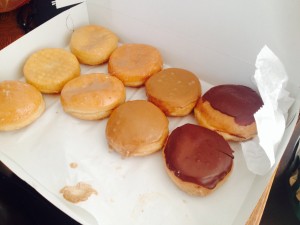 I was hoping to find some background on the store or the owners online, but they keep a low profile on the Internet. The Facebook pages links to Yelp, not a Le Cave’s website.

This isn’t a sponsored post, just a bit of local and family history.