It’s amazing how something like a dead battery in your camera can break your rhythm, and before you know it, you’re way behind on blog posts.

My last post was about our road trip to Prague.  Next weekend, friends from Tucson will arrive and we’ll be making short trips to Edinburgh and Berlin with them, as well as seeing the sights in our part of Poland, but don’t think all of our entertainment is exciting travel to foreign cities.  We don’t have to leave town to have a good time. 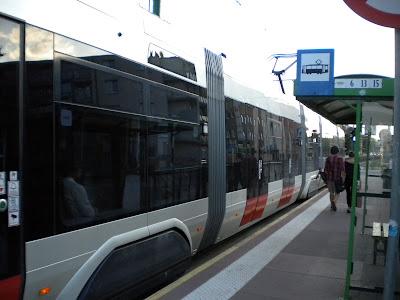 There’s a new tram in Poznan.  We’ve seen it when we were out and about riding other trams.  It always seemed to be on the other side of town – on routes that we didn’t travel.  We had joked about making a crosstown trip just to ride it.  Last weekend, as we were out running errands, we saw the new Solaris in our neighborhood.  It was on the number 6 route and coming to a tram stop near us.

That evening, we went to catch the number 6 tram – the new number 6.  We waited while several other, common number 6 trams came and went.  After about 40 minutes (crazy, huh?), and just as we were about to give up, the Solaris arrived.  It’s a very smooth, air conditioned ride – not something I always find on the trams. 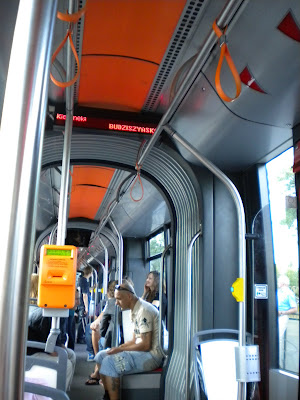 As we were riding with nowhere to go, we tried to reach a friend who lives in City Park, a ritzy area of Poznan to meet him at Mielzynski, a wine bar near his apartment.  He wasn’t answering, so we went to the wine bar without him.

No luck catching the Solaris on our return trip.  The good news is that Poznan has bought 40 new Solaris trams which should all be in service before the Euro 2012 games come to town.