Heavenly Cake Baker Submission #55
The Heavenly Cake Bakers are making the No-Bake Whipped Cream Cheesecake this week.  I have already made the cheesecake, so I decided to try the groom’s cake from the wedding cake chapter. 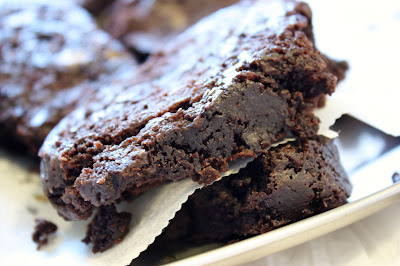 The first thing I want to do is give you a link to Marie’s post on this cake.  You’ll see what it should look like.  I don’t own the stadium pan, so I was using a more conventional bundt pan.  I always worry about getting the cake out of a bundt pan in one piece.  We’ll come back to this point after I tell you how the cake is made.

First, you make a pan of the most chewy, fudge-like brownie.  The brownies are allowed to set up around the edge, the center is still a little soft when the pan comes out of the oven.  I thing they would be perfect served warm with a scoop of vnailla ice cream.  Pazuki, anyone?  Not familiar with pazuki?  It’s a half-baked cookie (usually chocolate chip) with ice cream.    The brownie firm up in the fridge before being sliced into little chocolate chunks.

Now, you whip up chocolate cake batter and fold in the brownie chunks.  All of this goes into the bundt pan to bake..  If all goes well, after baking the cake is spritzed with whiskey.  I told a group of people I was planning to bake this cake, and the group quickly renamed it “Choco-Choco-Whiskey Cake.”

Now back to the moment of de-panning.  After being in the oven much longer than expected, I topped the pan with a cooling rack and flipped the whole thing over.  I could see that the cake had dropped about an inch; I was just hoping the top of the cake had stayed attached and dropped with the bottom of the cake.  As my confidence began to rise, molten, chocolate goo began to gush out of the cake pan.  I quickly righted the pan, and with a large spatula scooped up the escaping batter.  This hodgepodge of baked, partially baked, and unbaked cake went back in the oven.  When it came out again, the top, which becomes the bottom, was like a mountain range rather than the nice flat surface you would normally expect.  Half of the cake came out well, half of it split through the middle, leaving part of the cake stuck in the pan.

A perfect bundt presentation was out of the question, so I just sliced the cake layering it on a plate.  We’ll be sharing it with friends Wednesday night.  I was unable to find a spray bottle or atomizer, so I used a pastry brush to give each slice a wash of brandy.

What my cake lacks in appearance, it more than makes up in flavor.  It is wonderfully sweet,  moist, dense, and  chocolaty.  I’m sure I’ll give it another try.  I’m not sure what went wrong, but I suspect that at some point the oven was turned off before it should have been. 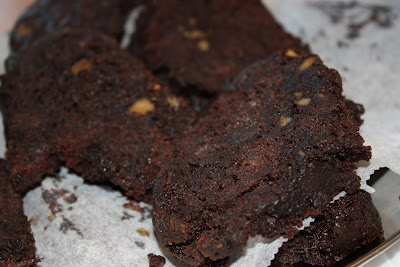