A couple of weeks ago, the Air Attache from the U.S. Embassy in Warsaw called to see if my husband, as a retired Air Force officer, would be willing to represent the U.S. government at an upcoming ceremony.

During World War II, a B-17 crashed near Swiebodzin.  (I’ve mentioned this town before; it’s the one with the Jesus statue,) A Polish group has dedicated themselves to remembering all of the American airmen lost over Poland during World War II.  As you can imagine, this takes a good deal of research.  The have created this monument in memory of the 4 air crew members from that flight that perished.  Three were on the plane when in exploded in midair; the fourth parachuted into a large lake.  He drowned before those on shore could reach him.  His body was recovered 3 years later and is buried in the Nowe Wioska (New Village) cemetery.

The villagers think of him, Leslie Chavet, as their American airman, and they  also wanted to honor his memory.  Hence, the ceremony we attended yesterday in Nowe Wioska. 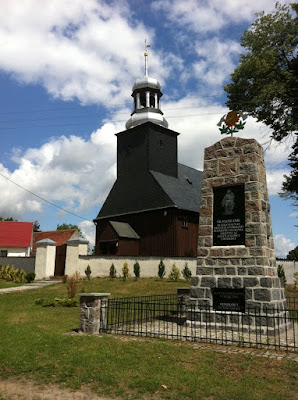 It began with a mass in the village church, complete with color guard from the local fire department.  Then everyone in attendance, about 75, walked to the cemetery with the priest and  3 girls playing snare drums leading the way. 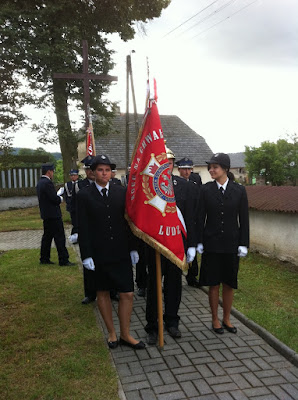 At the cemetery, both national anthems were played.  I must say that hearing the Star Spangled Banner in this setting was especially moving.  There were several speeches, the priest spoke, the governor of Pomerania, a representative of the village council, and my husband (complete with Polish interpreter). 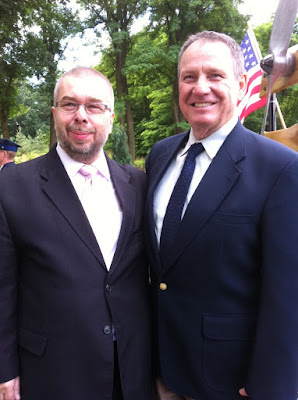 The event concluded with an excellant meal at the village government building.  I sat near the village council official, a reporter, and thankfully, the interpreter.  They were curious about my thoughts about the day.  I was very impressed with the large turnout, whereas, they almost seemed embarrassed by the number participating and explained that summer vacation had just begun and many families were traveling.  With a  village population of 293, I still think the attendance was very high.  I think a similar ceremony could have been held in Tucson (with a population of over half a million), and organizers would have been lucky to have 75 people in attendance.