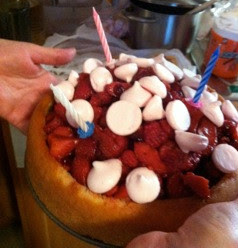 Our friends, Janet and Bill, were hosting a dinner party last week for a bunch of Americans.  I asked if I could bring this shortcake for dessert.  It’s good to have help eating these cakes.  It turned out to be the birthday of one of the guests, so thankfully, our hostess had candles, and the shortcake became a birthday cake.
I think the timing of this cake was perfect.  I was able to find both strawberries and raspberries in the market, and Ed and I thought they were both the best we’ve had all season.  I can buy fresh currants here too.
I was so excited the first time I saw currants.  I had to buy a package and had visions of whipping up some yummy dessert.  Sampling the red currants turned out to be a huge disappointment.  They were tart, as expected, but the little red gems were also chock full of little seeds.  I was hoping for a texture more like a seedless grape.  The package of currants sat in the fridge for a long time and eventually, went in the trash.
I decided to substitute dried cranberries for the red currants.  I soaked a cup of cranberries for about 20 minutes in 2 tablespoons of brandy and enough boiling water to fill the cup.  The liquid took the place of the Chambord in my syrup, and it was delicious!
The cake was baked in a 9 inch springform pan, and I hollowed out the center to make room for the berries.
I made adorable pink meringue kisses, that were much larger than they should have been – a tasty addition never the less.
We served the shortcake with a bit of whipped cream and vanilla ice cream.  It was delicious.