Hermelín is a Czech cheese that much like Camembert has a coating of white mold. A popular way to serve this cheese is marinated in oil, Marinated Czech Cheese (Nakládaný Hermelín). It’s pub food; it goes well with beer.

You might think we discovered this snack during one of our road trips through the Czech Republic, but no, a Polish friend, Symon,  had made a batch Marinated Czech Cheese (Nakládaný Hermelín). 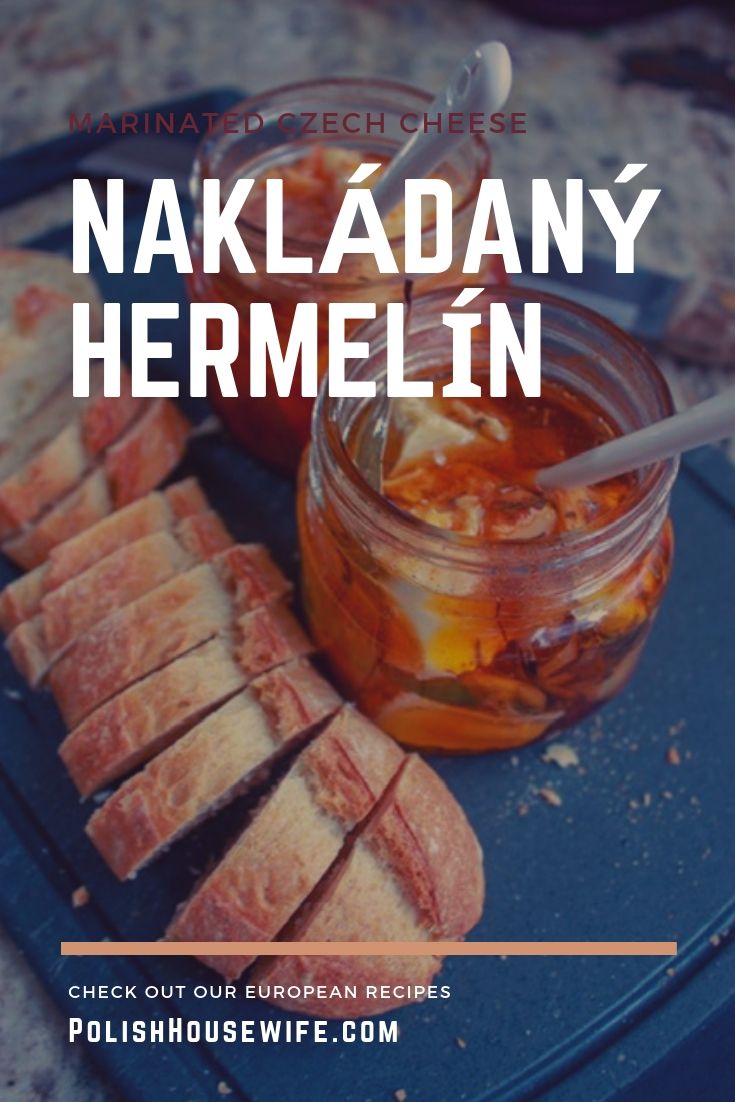 Symon is the proprietor of a craft beer place in Poznan, Piwna Stopa or Beer Foot; he’s also quite the foodie. It was at Piwna Stopa that we learned about sękacz, the Polish tree cake.

Symon is also the person who introduced me, a fan of Kriek the lambic cherry beer from Belgium, to Casis, the black currant cousin of the famous cherry beer. If you haven’t tried a lambic cassis beer, I highly recommend it. It’s tart and crisp, my new favorite. 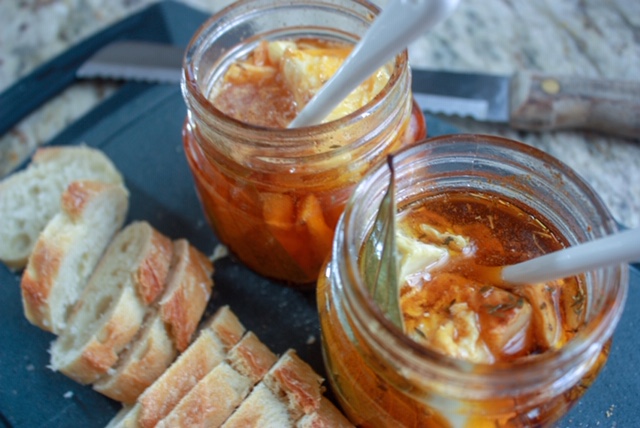 I’ve written about Piwna Stopa as a must see if you’re checking out craft beer in Poznan. You won’t find the big brand names of Polish beer, but you will find some Belgium beers, smaller breweries, and occasionally, even a house-brewed beer.

On our first night in Poznan last fall, Symon plied us with pulled pork sandwiches. When Ed stopped by a second time, out came the Marinated Czech Cheese (Nakládaný Hermelín), grilled bread, sausage, and pickles.

Since I wasn’t there, Symon made a video with instructions. This is how the marinated cheese is made in Europe.

For Americans, who take food safety very seriously. Sometimes overly serious. I’m thinking of the 2014 FDA decision to ban the use of wood in the aging of cheeses. I can hear France laughing from here, but talk of botulism does get my attention.

The technique used in Europe will present concerns. We are warned about raw garlic in oil and leaving dairy unrefrigerated. So I’m adapting instructions from Culinaria Eugenius.

I participate in the Amazon Associates program and earn a commission on sales via the links below.

Rather than using raw garlic and onion, I’m sauteing them first, and rather than leaving them at room temp for a few days, they’re going in the fridge for up to two weeks.

What will be missing here is the complexity of flavor that comes from fermenting at room temp for a few days. It’s as if you’d left nutritional yeast out of a vegan recipe.

Since we’re playing around with a Czech recipe, I’ll wish you dobrou chuť, the Czech version of smacznego!

Pub grub from the Czech Republic, Marinated Czech Cheese (Nakládaný Hermelín) is a soft cheese marinated with spices, and peppers

Slice the camembert cheeses in half, to give you two circles from each cheese, sprinkle with black pepper and paprika, add half of the onion mixture to each camembert and then top with the remaining half

Add the sandwiched cheeses to the quart jar, slicing into wedges if needed to make them fit

Add the jalapeno, roasted red pepper, juniper, allspice, and bay leaves working them into the jar around the cheese

Fill with enough olive oil to completely submerge the cheese, refrigerate up to two weeks, the oil will become thick and cloudy when chilled

Before serving with bread, microwave the cheeses enough to soften and make them almost spreadable