If you’re a fan of craft beer, be sure to check out Piwna Stopa in Poznan. We’ve been fans of Piwna Stopa since the beginning. We met the proprietor a couple of years ago at Browarfest in the Stary Rynek. At that time, he was tending bar at another pub.

Last year, we began seeing facebook check-in at a place called Piwna Stopa. When we finally stopped by, it was a pleasure to find Simon and Jan there. It’s become our go-to place for craft beer in Poznan.

Polish friends always give us a weird look when we recommend the place to them. In Polish, its name means Beer Foot, and the logo and much of the artwork include a woman’s foot. 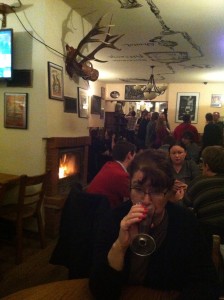 Footiness aside, the beer and atmosphere here are fantastic. They don’t carry the big name beers in Poland, but you’ll find 12 craft beers on tap.

There will be 13 on the chalkboard. The 13th one is a unique blend of the other 12 beers. That was the first drink Ed had at Piwna Stopa, and he said it was actually pretty good.

If you time it right, you’ll also find beers from Belgium. Simon recommended the lambic cassis to me, and I loved it ever since. Belgium Lambics are brewed without adding any yeast. They are naturally fermented with the wild yeast in the air. Many lambics feature fruit with barley and hops in very low amounts, so the fruit shines as in a cider or sparkling wine.

Polish Housewife participates in the Amazon Associates program and earns a commission on qualifying purchases via the links below. 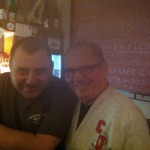 Its been interesting to watch the decor evolve. The furniture is all oak, a sturdy style, built in Belgium. There’s a mural on the ceiling of the brewing process. The chair rail has been lined with beer coasters, and beer bottle labels have begun to paper the space between pieces of art on the wall.

There’s a fireplace, that is most welcome during the winter months. When it’s nicer out, there are tables and umbrellas outside between the buildings. The vines that try to take over the area literally give the feel of a beer garden. 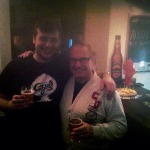 Last fall, Ed had planned a trip home, and Sebastian, one of the staff who is a home brewer asked if Ed would bring back some American hops. Ed gladly found some hops at a beer supply store. Our niece’s fiancé, who is also a home brewer, chipped in a big bag of hops too.

So Ed returned to Poland bringing gifts of hops and a couple of hard to find American craft beers. It’s enough to make a beer lovers heart sing.  Before we left Poland, we stopped by for the home brewing demonstration. The boiling wort made the pub feel like a room at the Palm House at Wilsona Park.

This special batch was to be served for Sylvester, New Year’s Eve. We were home by then, so we missed to beer and the party, but the brew was named “Ed’s Feet.” A thoughtful touch. It’s nice to know that we may be gone but are not forgotten. 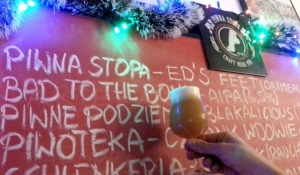 I will miss sitting outside at Piwna Stopa come summer. We’ll try to recreate the feeling as best we can in our own garden.