Hey, Polskie Forum The Beatles and beatles.kielce.com, thanks for stopping by! 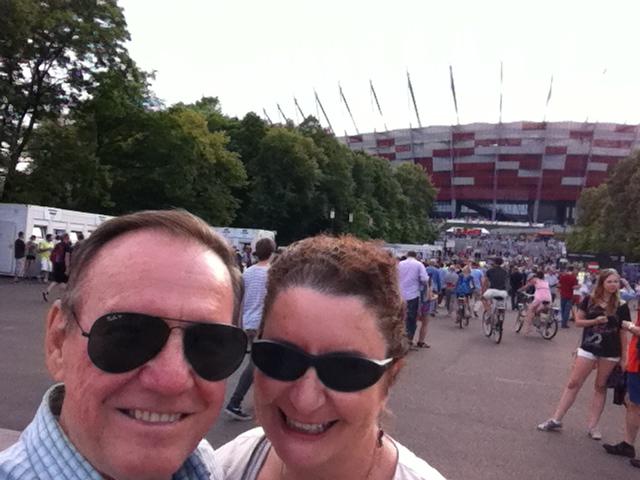 Last Saturday was Paul McCartney’s first performance in Poland, and my first time to see him in concert.  It was the third time for Ed, so it was interesting to hear how this show compared to others.  If it was like previous tours, we knew that the concert would be long, about three hours, and that Sir Paul would not leave the stage during the evening.  That’s right, he sang song after song, without a break.  Occasionally for a short time, the band would leave the stage, while he did something solo.  He is quite a showman still, at 70, and obviously loves what he does.

Ed and our daughter, Lauren, are both huge fans of The Beatles and Paul McCartney in particular.  They’ve read the bios and know all of the trivia.  I think I’m just the wrong age to have grown up loving The Beatles.  I would have been 7 or 8 when they first appeared on The Ed Sullivan Show – too young to care, and their music was too counter-culture for my parent’s household.  Remember, they were revolutionary in their day.  I’m a late comer to the circle of Paul McCartney fans.

As he sang The Long and Winding Road, the largest screen on the stage was filled with photos of the Sonoran Desert.  That’s home for me; the McCartneys own a 150 acre spread just outside of Tucson. Saguaros, our mountain ranges, I wasn’t expecting to see them in Warsaw of all places.  To recognize the sights from the other side of the world was very touching and made me more than just a little homesick.  I read once that the McCartneys appreciated the fact that generally, Tucsonans just left them alone. Several years ago, when Lauren was home from grad school for a friend’s wedding, her boyfriend at the time wanted to drive out in the desert to try to find their ranch after the rehearsal dinner.  It would have made a good story, but I don’t think it ever came to pass, and it just shows that he wasn’t a local boy.  Josh was from . . . California.  If you think about the lyrics of the song and know that their home in  Tucson is where Linda died, you can see why he always uses these photos, which she may have taken, when he performs this tune.

At one point during the concert, I leaned over to Ed and said, “I wonder if he’ll do back in the USSR.”  Yep, he did, and I was right to wonder how it would be received.  The visuals to go with the song were perfect and included a sign that said “Warsaw girls make me sing and shout” and a fast, almost subliminal flash of “free Pussy Riot.”  The Spanish couple to Ed’s left were standing and rocking out.  The Poles surrounding us who had been clapping along, swaying in their seats and smiling, sat perfectly still during the song just waiting for it to be over. It crossed my mind that it was a good thing that they loved him; he would not completely lose the audience over this.  When we got back to the hotel, I wanted to know the background of the catchy lyrics.  It was written during the height of the Cold War, during a very partisan time in the UK.  It’s supposed to be about a Russian spy who has been in the United States so long that he’s thrilled to be returning home.  It was very controversial at the time, seen as glamorizing and promoting the enemy.  It was so “in your face” that Ringo left the band over it.  Paul McCartney played the drums on the original recording.  His band mates eventually wooed Ringo back and the group moved on.  You can imagine how thrilled I was to have a piece of Beatles trivia that Ed had not heard before.

The crowd, which I’m estimating at 30,000, loved it when he tried a few Polish phrases – no easy task, believe me.  The main portion of the concert closed with Hey Jude.  We knew something was up because we’d seen people around us carrying in pieces of paper printed with “Hey” and “Paul.”  During Hey Jude, these were in the air.  I’ve found no mention of this happening in other cities during the tour nor did I find any reference on google.pl.  My guess would be the Legia Warsawa fan network spreading the word. (see comments) It was a nice birthday present for the star. 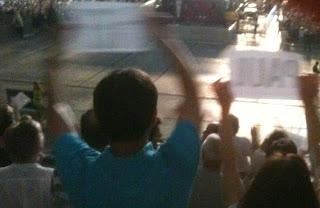 After two short encore sets, the stage dimmed and the stadium lights came up.  Thankfully, the police had blocked the street from the stadium towards downtown.  We and thousands of others took to the street and walked back our hotel.

We traveled to Warsaw by train Saturday and returned Sunday.  I made a mistake at the Intercity office that I will never make again.  I didn’t insure that we were on the express train to Warsaw.  The extra time on the train didn’t matter, but having 8 people in the compartment rather than 6 was very uncomfortable.  With 6 other people in close quarters, there will always be one or two who fancy themselves the center of the universe.  We had one at each end of the compartment.  🙁  Less than perfect bookends to a great weekend.