City Chicken isn’t actually chicken; it’s also been known as mock chicken. It’s sometimes thought of as a Polish recipe, although it’s not actually from Poland. What’s up with this dish?

Dating back to the turn of the previous century, City Chicken, a Polish-American recipe, has roots in Pittsburgh, Pennsylvania and Cleveland, Ohio and spread to Great Lakes cities such as Detroit, Michigan and Buffalo, New York. Nostalgic comfort food from the Rust Belt. 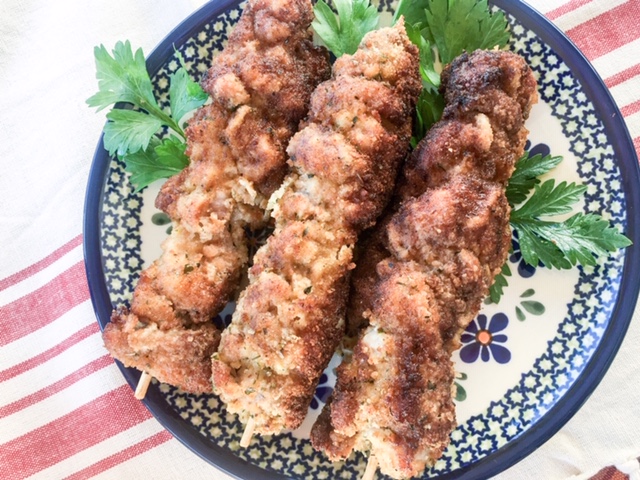 Made of small bits of meat, usually pork and veal because during the Great Depression, they were less expensive than chicken. The meat used was often scraps, placed on a wooden skewer and formed to resemble a chicken leg. It was breaded and fried and/or baked.

I made City Chicken over the weekend, it was the first time I’d sampled the mock chicken, and I have to say the experience is very similar to eating fried chicken. My husband, Ed, grew up near Pittsburgh, and is a more experienced connoisseur of City Chicken than I. When I said I was going to make it, he knew what I meant. 🙂 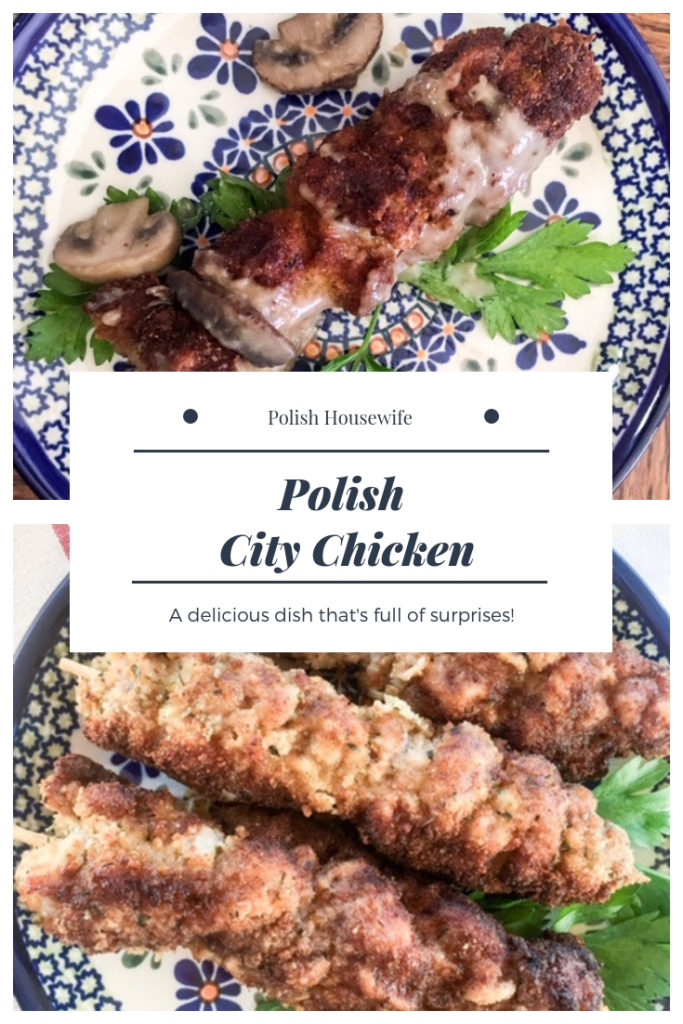 He told he that the last time he’d had City Chicken was probably in a restaurant in the Strip District, at the foot of Polish Hill (home to the Immaculate Heart of Mary church), on a visit to Pittsburgh. If you’re ever in the area, it’s worth a stop in the Strip District.

Wonderful food markets and restaurants. There’s a Polish Deli, Wholey’s (an amazing fishmonger). This is where I first visited a Penzey’s Spice store (long before they had a location in Tucson), first sampled the Pittsburgh classic of steak strips and french fries garnishing a green salad, but that’s another story.

Ed remembered seeing City Chicken the grocery stores when he was growing up, packs of stew-like meat with skewers included, but his family usually ate chicken. I think by that time, the price pendulum had swung the other way because even though money was tight, his mother fried a huge platter of chicken every Sunday as they hosted extended family.

In the interest of full disclosure, I participate in the Amazon Associate program. If you make purchases via the Amazon links on this page, Amazon sends me a few cents as no extra cost to you. Thanks in advance for your support!

Like most recipes, there are many variations. You have many cooking options: deep fry, pan fry, fry and then bake to finish, or just bake. Some like to serve City Chicken with some kind of gravy, we had it with my mushroom sauce.

If you’d like to make this a low carb recipe, try any of these substitutions for the bread crumbs; all are tasty and satisfying ways to get the desire texture in the coating:

City chicken is a tasty nostalgic dish that I think you’ll enjoy. Can you think of other recipes with such misleading names? I’m sure this isn’t the only one.

PS – I found a vintage city chicken mold, an advertising item for a butcher supply company, and did a taste test using ground pork, a mix of cubes and ground pork, and the only cube version that I have written up below. Ed and I have given up meat for Lent, but we had a friend over for dinner, and Jeff was the official reviewer even though he had never had city chicken before.

As I suspected, the mold shapes the meat best when using just ground pork, and that was Jeff’s favorite version. He just liked the texture best. If you want to give it a try, I mixed the ground meat up much like meatloaf: 1 pound ground pork, 1 egg, 1/3 cup dry breadcrumbs, 1 teaspoon salt, 1/2 teaspoon ground black pepper, 1/4 teaspoon ground marjoram, 1/4 teaspoon garlic powder. Then I breaded the skewers as described below. I just baked them at 350 for 25 minutes, but you could pan fry and bake as below. 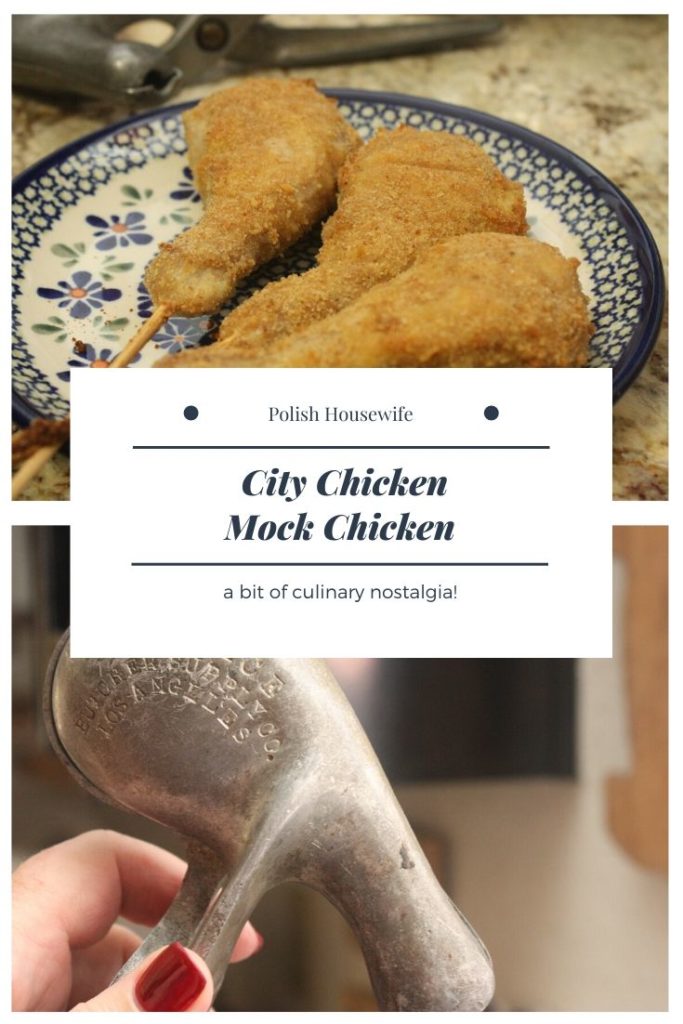 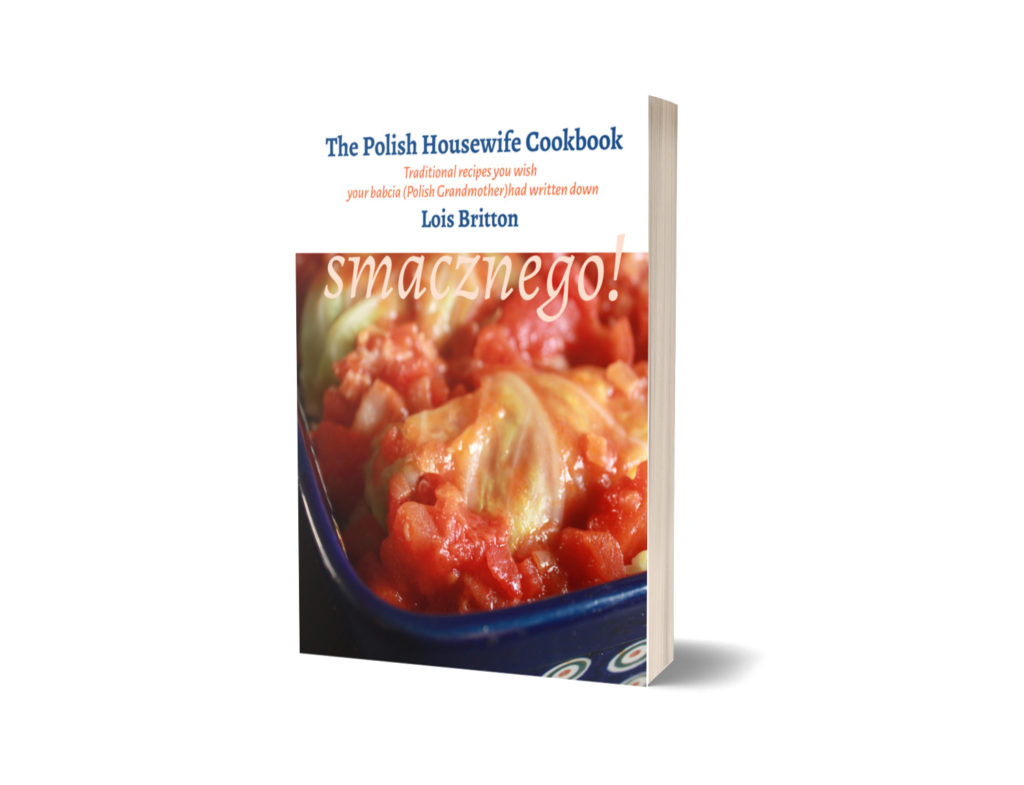 If you have a wire rack that fits in your baking dish, you might use it and add a little water to the bottom of your dish to steam your chicken city and keep it moist as it bakes.

Another possibility is to place the skewers on top of crumbled foil (to keep it out of the water) or on top of vegetables that you’re roasting at the same time. Because the “chicken legs” are only in the oven for 20 minutes or so, the vegetables will 1. need to be in thin pieces to cook during that time, 2. or they will be al dente, 3. or you could bake the veg a bit before or  after the meat.