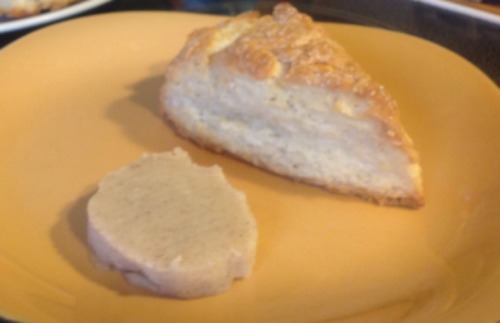 Compound butter or beurre composé is such a lovely finishing touch. I whipped up this compound butter to top off my candied ginger scones. The scones are delicious on their own, but I was preparing them for a group of friends, and wanted to add something special. Ina Garten’s recipe was my starting point, but I’ve added a few more spices for my cinnamon honey butter.

Since this spread was served alongside a ginger flavored pastry, it seemed natural to add spices that would be found in chai tea. It’s a proven combination; we know they go well together. I’ve doubled up the cinnamon and added cardamon and ginger. If I had a spice grinder, a little star anise might have found it’s way into the mix too. Don’t think you have to make ginger scones to use this butter. I can see it improving toast, English muffins, corn bread, pancakes, waffles, etc.

Even though I’m suggesting you chill the cinnamon honey butter to preserve the new shape you’ve formed, please give it some time out of the fridge before serving. You want the butter to spread easily and the spice flavors will be more pronounced if not cold.

One of our favorite places in Poznan serves a delicious bread with their meals. It’s hardy and dense and comes with a selection of three colorful compound butters piped into cute little stars. The only problem is that the plate and butter have been kept in the fridge (or maybe even the freezer) until the moment it’s brought to the table. Trying to spread it only tears up the bread. Oh how I wish they would pull it out when they start cooking our meal. Because on the rare times when some of this bread remained after a meal, when the butter had been sitting on our table for 30 to 45 minutes, it was heaven. It spreads like a dream and the favors of all the spices and herbs that have been added come to life. Dare I tell them?

I love Poland and Poles, so I say this with all due respect, but they don’t take criticism well, even well intended suggestions for improvement. I’ve seen enough here to understand this aspect of the culture, but the American in me sees this as crippling and unnecessarily delaying needed improvements.

Do you think I’m exaggerating? When visiting a new restaurant, our table was served a bowl of mushroom soup that contains a piece of wood the size of a clarinet reed. I’m sure that it broke off of a basket the mushrooms had been in. We were only at the restaurant because the two managers were friends of ours, and we wanted to support their new venture that had taken months of preparation. When we quietly mentioned it to one of the managers before we left, trying to be helpful, his response was, “it’s not my fault! On the one occasion we asked for a manager at one of Magda Gesler’s restaurants, we were told there was no manger on duty.

All this to explain why I haven’t said anything about cold, hard butter at a place we frequent often. What would you do?

Your favorite spices from chai tea in a spread