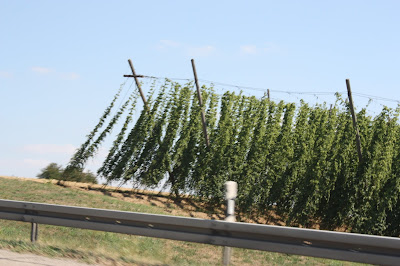 Driving between Munich and Berlin, an interesting sight for me, are the hop fields.  Hops are not a desert crop. I can spot cotton, but I wouldn’t know hops if there hadn’t been an exhibit with a sample planter of hops plants growing at the Stary Bowar shopping mall a couple of years ago.  Once you’ve seen them, the tall trellis is a real giveaway.  Germany is the world’s leading producer of this beer ingredient, but we do occasionally see them in Poznan climbing up a fence as in the photo below.

Berlin was the last stop on our road trip with Lisa.  She flew home from Tegel on Saturday and is already back at work and school.  We’ve been to Berlin several times, and have another trip planned next month. Fortunately, the city has so much to offer that there’s always something new to do. 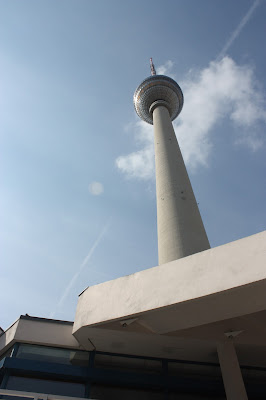 We were in Berlin for my birthday, so Ed suggested that we venture up to the top of the landmark TV tower. Built during communist times, the ball at the top reflects light in such a way, that when viewed at a distance, it forms the shape of a cross.  That feature was unintentional and was referred to by some as the Pope’s revenge.  The first tour guide we had in Berlin said that the tower was built with funds sent from the west meant for repairing churches damaged during WWII. I haven’t been able to confirm that last tidbit with a reliable source, like Wikipedia. 😉

Misappropriated funds or not, Ed had heard that there was a rotating restaurant up there in addition to the observation deck.  The line had already formed when we arrived about 11 AM.  After a 30 minute wait in line to buy tickets, we had to wait another hour before our group was called to go upstairs to the elevators, which quickly whisk you up 200 meters in less than a minute. 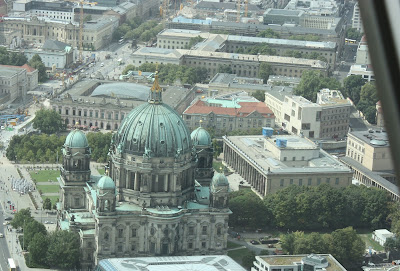 Last summer, we climbed to the top of the dome pictured above.  At the time, it seemed like an amazing view of the city.

Not that our trip was all fine dining.  You have to make time for a brat or curry wurst, and a visit to the Irish Pub, where the German staff speak English with an Irish accent.