After a soggy day of castle sightseeing, we settled down in Munich for three days. Ed and I were there for a weekend last summer, but it was the first visit for Lisa. This is not to say that Lisa was the novice on our trip. We had some basic knowledge of sights to see and the layout of the city, but Lisa is the only one of us that knows more than 10 words in German. She minored in German at ASU and is now taking classes at the UofA towards a bachelor’s degree in German. It’s so nice to travel with someone who can read the signs! 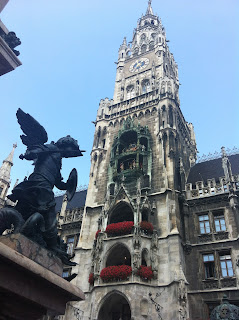 We stayed in a hotel, just a couple of blocks from Marienplatz, the historic center square of Munich. The town hall with the famous glockenspiel (think life sized cuckoo clock) dominates with square. We didn’t time it right to see it chime. Apparently, it plays at 11 AM as well as noon and 5 PM in the summer. 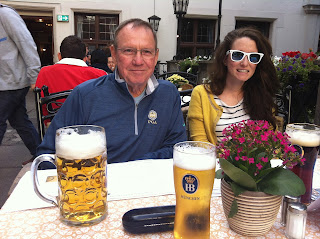 Our hotel was even closer to the Haufbrauhaus (HB). Originally the royal brewery, the famous structure was a favorite location for Nazi party functions. Today, you’ll find the HB serving traditional Bavarian food, really good beer and oom-pah-pah music (the dream job of every trombone and tuba player). We had a meal there last summer with some of Ed’s flying buddies, and we went there this time for his birthday dinner. I guess it’s something you should do because of the historic significance of the place, but as a restaurant serving guests, they rest on their historic laurels. There is the distinct feeling that you’re a widget speeding down the assembly line. What?!! You’d like the green salad with just oil and vinegar? I don’t know if that can be done. I’d have to ask a manager. The kitchen is downstairs. They did deliver the salad requested but with so many theatrical excuses that it exhausted my patience. 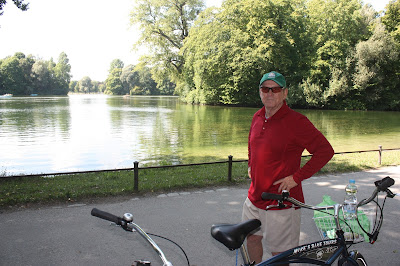 While Lisa was checking out art museums, Ed and I rented bikes and spend 3 hours cycling through the English Garden. With our brief commute between Mike’s Bike Rental (very friendly helpful folks) and the garden, we found Munich to be a bicycle friendly community. 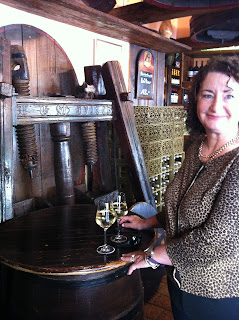 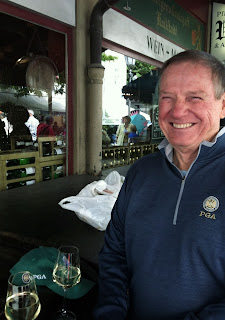 We also spent time at Viktualienmarkt, sort of a very grand farmers market, not far from Marienplatzz. We picked up some fruit and veg for our vegan traveling companion, and found a great garden shop. On the edge of the market we came across a wine market where they’ll also sell by the glass. We liked it some much that we went back a second time. Ed noticed that both times, we’d been the only tourists there. They had a steady stream of locals stopping by. The people watching was great.

We chatted with an old guy (in case you’re wondering, 10 years our senior is what will qualify for the old description, that may change) who had stopped by at noon for a glass of wine before he headed home with his market purchases. I’m guessing it was what his wife needed to prepare dinner. He said you’ll see more on this corner than you will in a year in other places. It seemed many people picked up a sandwich (we observed two kinds, herring and onion or smoked salmon, nothing that resembled a McFish) at the fish monger next door and enjoyed it with the glass of wine.

We also saw a group of three older ladies meeting for a chat and a glass of wine. One of the three was dressed in traditional clothes. Ed’s explanation was that her friends had played a joke on her. “Let’s tell Hildegard that we’re all going to wear our dirndls when we meet and we’ll trick her by wearing street clothes instead.” As the more literal of the two (and I’ll admit, the more boring), I assumed that “Hildegard” worked in one of the shops nearby where the dirndl was her uniform, and she was simply meeting them on her way home from work.

We left Munich with such good feeling about the city and Bavarian people in general. Berlin is the only other German city we’ve spent much time in and Munich comes off much more favorably in that comparison. We stopped to check a map as we were biking to the English Garden and a women cycling past stopped to ask if she could help us. She gave us directions, warned us about the 40 euro fine for cycling on wrong way on the bike path, and then doubled back a minute later when she remembered a tunnel that would be a good short cut for us – not something you’d find in the big city.