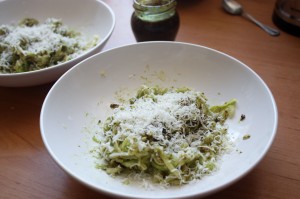 For this recipe, I’m using raw zucchini as if it were pasta!

I have a recipe from Six O’Clock Scramble on my Summer Celebrations Pinterest board. With this in the back of my mind, we woke up late one morning, the result of a night out. After tea and coffee and checking our iPads to see what we’d missed while we’d been sleeping (the new equivalent of reading the morning newspaper), I remembered that we were out of our usual breakfast foods! 🙁

The one thing we did have was a couple of zucchini. It was late enough to call our meal brunch, so this is what we made. A veggie based, pasta-like salad, enough to keep us going until we made a trip to the supermarket. While not as fancy as Aviva’s on Six O’Clock Scramble; it was still very enjoyable! I think grated zucchini could be a great low-carb carrier for many of the sauces we usually put on pasta. I’m thinking about a red sauce next time.

I don’t have a tool for making julienne strips, so I simply peeled and grated the zucchini using the coarse side of my box grater. The grated squash went into a large strainer, sprinkled lightly with salt. After 5 minutes, I pressed the water out and tossed with some pumpkin seed pesto that I picked up at Market Hall Number 9 in Berlin. A grating of fresh Parmesan cheese and we were ready to eat. If I can find vegan pesto and substitute nutritional yeast for the Parmesan, I could make this for our vegan daughter.