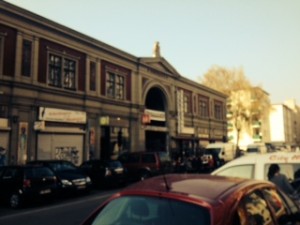 Add this to your list of things to do in Berlin: Markthalle Neun! It’s a huge indoor market, filled with produce, flowers, ready to eat food, real food, and interesting hard to find food. I can’t think of another farmer’s market where I’ve come across truffle in honey.

My friend Chris, a chef who used to live in Berlin, suggested Markthale Neun to me while we were at the one-year anniversary celebration for Voyager Wine Bar. He knew that as someone who is adventurous about food, I would love it, and he was right. Before I move on to the market and our trip to Berlin, let me take to say the wines we sampled at Voyager were some of the best I’ve ever tasted and reasonably priced. (This is not a sponsored post, just fact IMHO.)

Chris mentioned some of the history behind the market, but with wines, tapas, and people coming and going, we didn’t get into great detail. I did however, find the story on this great blog about Berlin, The Needle: Sharp on Berlin. The market is called “number IX” because it was one of 14 located around Berlin in the late 1800s.  Some of the markets were destroyed during World War II; some have been transformed into massive, modern supermarkets. Markthalle Neun has not been restored and sat empty for many years until 2009 when efforts began to bring it back to life. 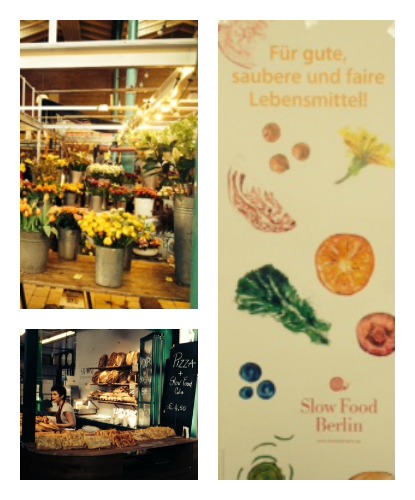 It’s now an integral part of the Kreuzberg area in Berlin. On Thursdays, it’s open in the evening and is packed with crowds who are there to sample a huge variety of street foods from all over the world. According to one of the vendors I spoke with, it’s loud, it’s hip, be prepared to queue up.

On Friday and Saturday, the market is open during the day and is more of a traditional farmers market. Let me take you on my loop through the market, doing my part for the local economy. 😉 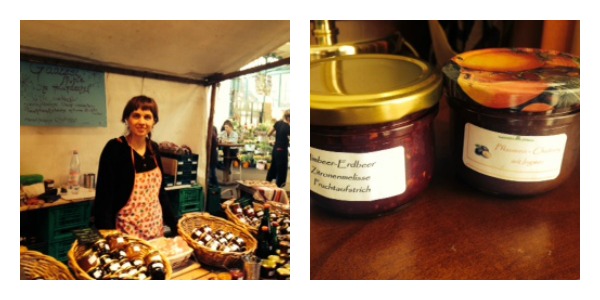 My first stop was to buy preserves, one a plum-chutney with ginger, the other a raspberry, strawberry, lemon balm fruit spread. I didn’t think to look for a business card at this stand, but the young woman working there said the owners have a small farm in the north of Germany and make the products, for the most part, with things they grow. 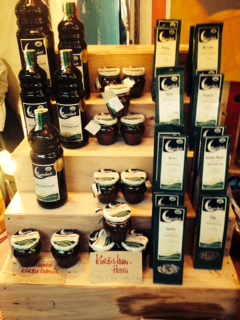 I visited Monschein Berlin, who offer a selection of all things pumpkin, pumpkin oil, pumpkin pesto, pumpkin seeds in eight different flavors, pumpkin orange marmalade, pumpkin nut biscuits, and even pumpkin chili. I opted for a jar of pumpkin pesto. Can’t wait to use it! 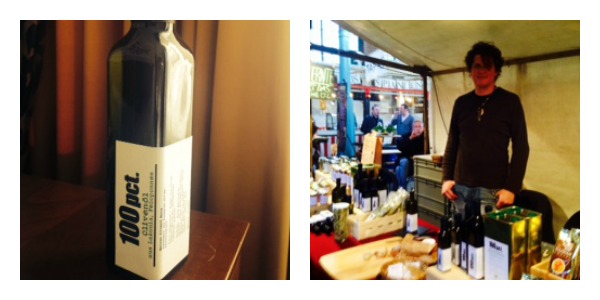 Next, I sampled two olive olives from Greece. Not sure how far my euros would go or how much weight I would have in my shopping bag, I gave the young man behind the counter the line my daughter and I hear so often when we’re working the farmers market with our biscotti, “Let me think about it.” He replied, “no problem,” as he pulled out his glass of wine and took a sip. I had to ask, “you get to drink wine while you’re working the market?” “Of course, why not?” was his response. I told him I thought it was a great idea. Now, I have to rethink my complaint about there being too many rules in Germany. In case you’re wondering, there is a vendor selling wine. Be prepared to leave a deposit for the glass.  I returned and picked up a small bottle of their milder oil before I left. 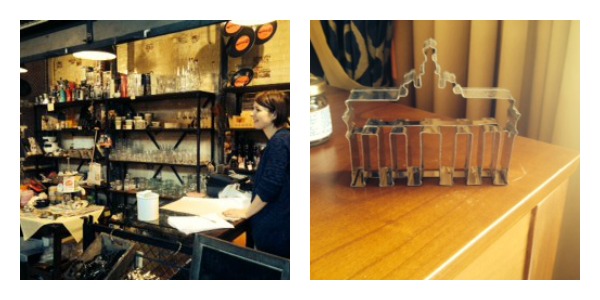 At Küchenliebe, a booth with kitchen wares, I bought a Brandenburg Gate cookie cutter. Our daughter is finishing a degree in German this spring. I can see some Berlin themed cookies being part of the celebration. They have a storefront besides their market stall. From the website, I see they carry many cute things beside kitchen goodies. I’ll have to check it out next time I’m in town. 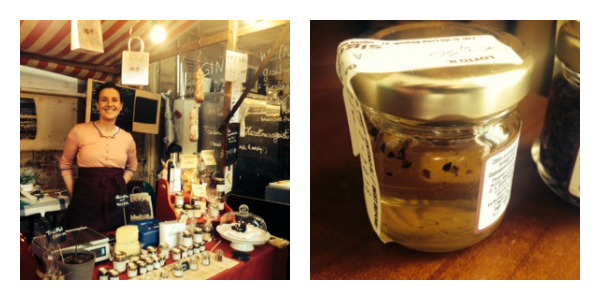 A sign reading Trüffelen and More caught my eye. I’m linking you to some fascinating photos on the market’s facebook page about the truffle process because as I write this, their website is under construction. Maybe if you check back later, you’ll be able to get information straight from the source. I had a nice chat with the lady behind the counter, and sampled truffle mixed with many things. Our conversation was aided in part by translation from my fellow food blogger, Melanie, of Mango Soul, who was visiting the truffle booth after recently posting a recipe with Trüffelen and More ingredients. Melanie, a pescetarian, writes about food and travel. You’ll want to check out her blog! I left with small jars of honey with truffle and porcini mushrooms with truffle. 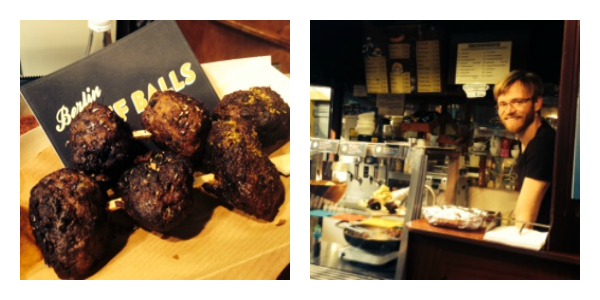 I finished off my visit to Market, by stopping by Berlin Beef Balls, to get some takeaway. These are delicious meatballs, using the traditional German boulette for their starting point, then other varieties are created with spices. I had a nice chat with one of the owners as he prepared an assortment for me to take back to the hotel to share with Ed. I took mine plain, but you can also get an herb potato salad on the side. Besides selling at the market, they do catering. When we had dinner in the hotel dinning room that night, Ed ordered a burger and the meat paled in comparison to the beef balls that we had for our afternoon snack.

I spent a fun hour, shopping and chatting, but there were still so many vendors that I didn’t get to visit. We’ll have to make another trip! When we got back to Poznan and unloaded all of these new treasures, Ed, who is very supportive and patient with my mad scientist in the kitchen alter-ego, asked “what are we going to do with these things?”

What’s the most interesting thing you’ve picked up at a farmer’s market? 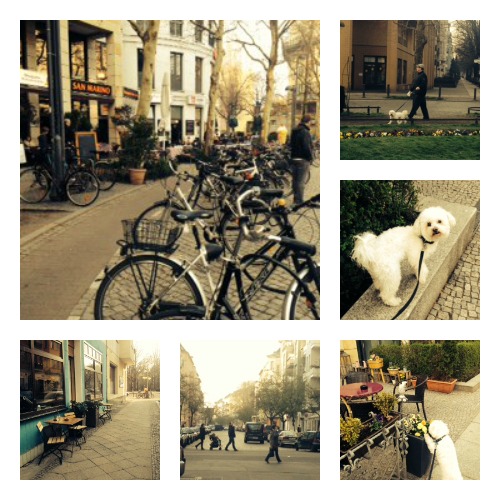