My daughter brought home stroopwafel (and hagelslag, chocolate sprinkles eaten on bread and butter or straight from the box) from a visit to Amsterdam.  Her friend, Gertjan, said these two treats epitomized the Netherlands.  Never mind wooden shoes and tulips, those are for tourists.  Stroopwafel and hagelslag say home to Nederlanders.  (Correct me if I’m wrong, Linet!)  🙂

I was amazed by these stroopwafel cookies, which I have since found stateside in stores that import international delicacies.  The outside of a stroopwafel is crisp and the middle is a wonderful chewy caramel.  It seems like the filling should make the “waffle” soggy, but through some magic of culinary chemistry it doesn’t happen.

The cookies are traditionally warmed by sitting them on top of a cup of hot coffee or tea.  I used them recently to garnish cupcakes, cutting them with cookie cutter and creating vertical element by running a toothpick through the middle. 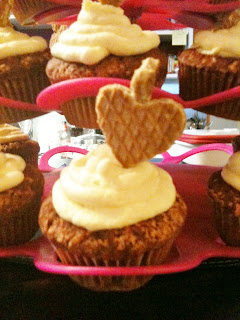 Stoopwafel originated in Gouda more than 200 years ago.  And now, we have a kiosk here in Poznan that makes these goodies which you watch.  I was so impressed with the knife skills that I had to get some video.  It’s such a treat to buy a bag while they’re still warm.

I have an electric pizzelle iron at home in AZ.  I think I could make the waffle cookie on that iron.  Then comes the hard part, getting the perfect split down the middle.