Americans tend to keep their sweet and savory separate. Fruit in a recipe? That must be a dessert. Savory vegetables? That must be for supper of maybe lunch, certainly not breakfast.

For breakfast, we want something sweet. Even when we have a heartier breakfast that might include meats, think of what they are traditionally. Sugar-cured ham, sugar-cured bacon. Toast? Let’s put some jam on that.

I often wondered if they were leftover from a salad bar the evening before or made especially for breakfast. It wouldn’t surprise me to see Salatka z Pora i Jablka – Polish Leek and Apple Salad on a breakfast buffet. 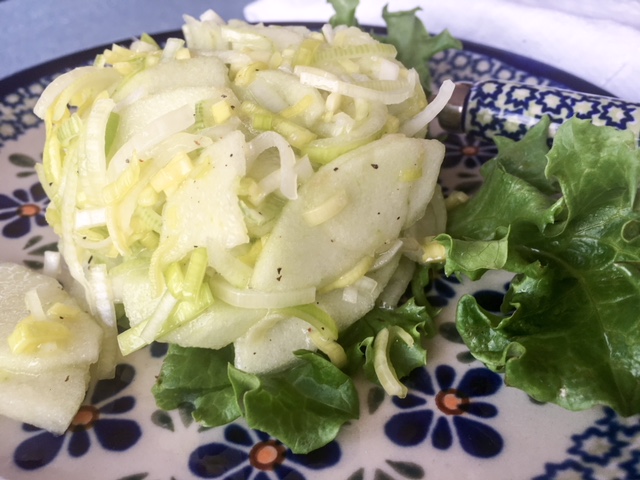 Sweet and Savory Together

This simple salad of leek and apple does something I see so often in Polish cooking, mixing sweet and savory together. Polish recipes for bigos (a hunters stew) or liver often include prunes and or apple. A cabbage salad will include grated apple. Here we have leek and apple in a simple dressing. The flavors and textures go together beautifully, surprisingly so for my American palate.

In the interet of full disclosure, I earn a small commission if you shop via the Amazon links below.

Ed loved this salad and suggested that I make when his golfing buddy and his wife come to dinner in a couple of weeks. Even though this is posting during Lent, I think the simple ingredients will still be part of everyone’s meal plan. Unless you’ve given up delicous during this time of fasting and reflection.

If you wanted to jazz this up a bit, you could add a spoon of mayo, sour cream, or plain yogurt, or any combination of the three, but I like it as is. I discovered this salad on the website of Polska Foods, the now defunct maker of organic pierogi.

salt and pepper, to taste