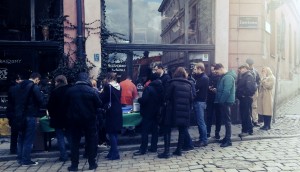 Restaurant Day began in Helsinki, Finland almost three years ago. A would-be restaurateur, put off by government restrictions and paperwork, joined together with friends with the thought of opening a one-day popup restaurant. The laws don’t apply in Finland if you’re only doing it for one day – similar to Health Department exemptions for Bake Sales in the US.  They called it Restaurant Day and there were 36 popups in Finland and one in Pineville, North Carolina, USA back in May 2011. Restaurant Day now happens four times a year. With social media, it has spread across the globe. Anyone who wants to can join the fun and set up a restaurant for a day.

Yesterday, there were 1168 popup restaurants, 23 of them here in Poznan. With our friends, we managed to sample the fare at six of them.

Our first stop was at a language school in a beautiful old apartment building on Plac Bernardynski. As you can imagine, those who teach foreign languages need to travel and hone their skills with native speakers. Some of the staff had spent time in Portugal and wanted to share the good food with the rest of Poznan. They just hadn’t expected so much of Poznan to take them up of the offer.

When we arrived, they apologized profusely saying that they were really sorry, but they didn’t have a place for us. We gladly waited in the hallway, and within a few minutes, they brought in a table from another room and set it up in the hallway for us. After more than one person apologized for our seating, saying that it was the first time they’ve done this, we ordered one of everything on their menu, sampling five savory dishes and two sweets.

Most of the savory dishes included fish. It was used in ways that surprised me including something like a pancake. I snapped a photo of their menu, in case I want to google the dishes and try making some of them myself.

After catching the tram to Marcinkowskiego, we set out on foot, sampling yummy cupcakes and savory muffins prepared by Dolina Muffinkow. Then on to the Poco Loco Hostel where several popups were installed on the 3rd floor. Here we had Moroccan food and an excellent little pear tart. As we crossed through Plac Wolnosci for the second time, I grabbed a bite-sized almond tart (my favorite flavor) from fellow food blogger Ali Baby. I have to thank our mutual friend, Justyna, for the photo of the Ali Baby popup. (Her’s were better than mine.) Our final stop was an outdoor grill serving up cheeseburgers with a hot sauce and bacon marmalade (something that sounds so interesting that I know I will have to make it.)

As we were traipsing about town, we noticed police on almost every corner. Before we got to the Old Market Square, we could hear the chant of the football fans. Marching toward the stadium for that evening’s match. Wanting to see them pass through the square, we also crossed paths with a church procession, entering the square at the same time.

The football fans were  carrying flares as if they were torches, tossing the occasional cherry bomb. In addition to singing their usual football chants, there were also patriotic songs. As we later debated whether they were fans or nationalists, an English gentleman, an Arsenal supporter, in town to visit a Polish friend, told us it was a group of football fans, but that they were also commemorating a famous date in history between Poland and German in 1919 (I have been corrected, thanks, Klaudia). They had been part of the group but had popped into Basilium for a cold one before the match. Mystery solved; except that I can’t find record of an important date this early in 1914. Polish readers, can you help me out?

I’ve condensed our day into just over two minutes in the video below. I hope it tempts to you look for Restaurant Day near you in May, or to make your own restaurant for a day!