Yarn Bombing, or covering things with knitting or crochet has been around for a couple of decades, but Ground Cover is a novel twist on this public art medium. Rather than linger for years, this fiber-art installation lasted  less than 48 hours and then was put into service.  The City of Phoenix commissioned Arizona artist, Ann Morton for this project, which was funded in part by the National Endowment for the Arts. Ann, with a background in graphic design, created and graphed a lush desert floral scene, similar to something I might use for my counted cross-stitch projects. Except that in Ground Cover, each square was 10 inches x 10 inches not just one x stitch.

The squares, which were knitted, crocheted, and quilted according to the color chart and graph, were put together in rectangles – four squares by seven squares. That’s what each volunteer “blanketeer” or group of volunteers committed to do – a 40 x 70 inch blanket. The individual blankets were assembled on a vacant lot in downtown Phoenix in December. With a lot of planning and care, the assembled blankets created Ann’s original design. My daughter and I operate a home bakery, and I just happened to be selling our biscotti at the Downtown Phoenix Public Market the day the project was completed and got to see it before it was disassembled. From ground level, it was difficult to see just what the picture was, but the graph was on display, and once I knew what I was looking at, I could make out the design. 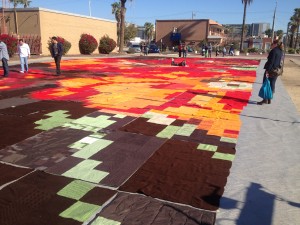 I got to speak with one of the participants, a yarn shop owner from the White Mountains (a four hour drive from Phoenix). Her customers had heard about the project and they started asking if the shop was going to participate. As a group, she and her customers, some out of state, completed one of the rectangles.

It was a happy surprise to find one of my daughter’s friends among the group of volunteers – an accomplished knitter and probably one of the younger participants, you can read her account of the project and see some great work-in-process photos on her blog: Anti-Quotidian. There’s also a facebook page for Ground Cover Public Art Project. Their photos will give you a better idea about the scale of the project and the variety of techniques used.

The best part of this project in my mind is that after it was assembled, oohed and aahed over, and photographed, the blankets were distributed to nearby homeless people and to several agencies working with the homeless.

This was only my second time to personally encounter a fiber-art project such as this. This first was here in Poznan when our Stary Marych statue sported a customized afghan. When I told my sister-in-law about Ground Cover, she said it reminded her of the Knit the Bridge project that lined the Andy Warhol bridge in Pittsburgh.

How about you, have this style of public art made it to your area?