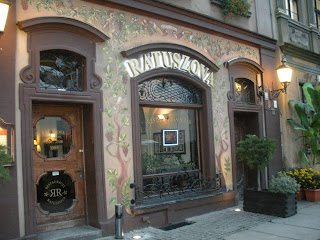 We enjoyed a great meal Restauracja Ratuszova in the town square in Poznań, Poland. My husband had been reading about it online.  It’s described as being built into a cave. 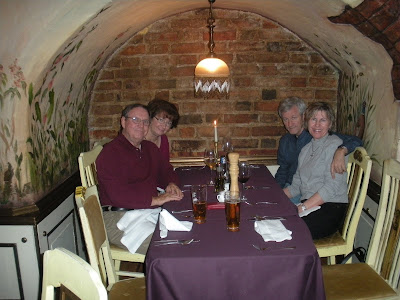 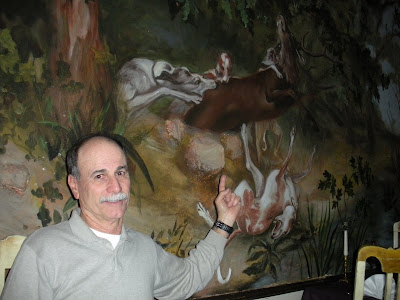 The main dining room and bar are in the cellar and have a very Old World feel, right down to the mural. 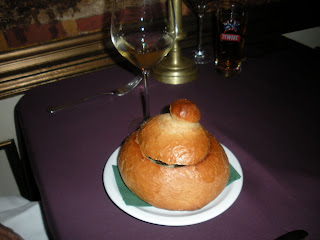 I was chatting with a Polish pilot a couple of weeks ago and asked what I should be sure to try when dining out in Poland.  He told me that most meals in Poland begin with soup – Zeruk and Barscz come highly recommended.  Tonight I tried the Zeruk, a sour, white sausage soup.  Note the adorable presentation, right down to the knob of the bread bowl lid. 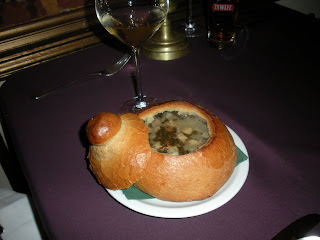 In addition to the soup, our table tried: 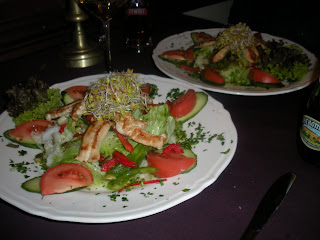 Salad with chicken – it was agreed that the salad had a decidedly European taste to it, possibly the chopped fresh parsley. 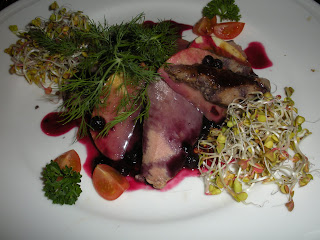 Roasted Wild Boar, with a blueberry sauce (according to the website, we thought it might be black currants), and radish sprouts.  The boar had a nice flavor, but was a little chewy.  I think it’s like having alligator in Florida; you have to try it. 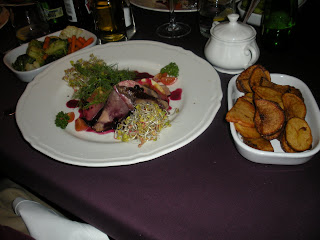 All of the entrees were served with roasted potatoes and mixed vegetables. 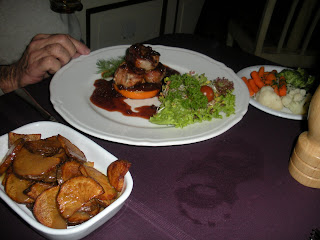 Pork loin, wrapped in bacon, served with a cranberry sauce 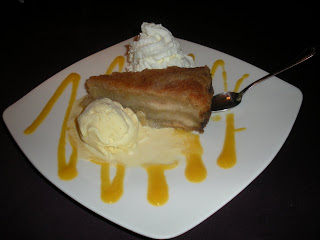 Apple pie with a peach sauce, tasty
I’m pleased to say that culinary options have improved a lot since my brother was in Poland 20 years ago teaching English as a Second Language and exisiting on potatoes and cabbage.  Our share of this meal (for 2 people) came to $62, including tip,  for soup, salad, wild boar, a glass of wine, two beers and apple pie – certainly more affordable than less memorable meals in other European cities.
I must add a thought here and say that Ratuszova was the first place I’ve been to in Poland to offer a non-smoking dining room. It’s been a couple of years since smoking in public places has been banned in Arizona.  It seemed so radical at the time (especially the requisite signage), but I’ve not only gotten used to it, but have come to really appreciate it.