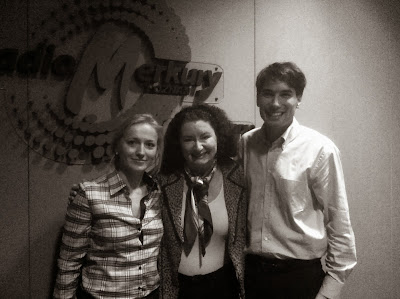 My friend, Angelika, and I recorded an interview for Poznan International Radio yesterday. Maciek, the host, is a friend of ours, so it was fun to chat with him. The show will air in a couple of weeks on Radio Merkury. We talked about the Poznan International Ladies Club, Polish food, and blogs. Ever since I met him, Maciek has been surprised that there are such things as the ladies club and book club meetings, but it’s really not that much different than the couch surfing group in Poznan that meets monthly. People like to connect with others who share their interests. Humans are meant to live in community.

It was interesting to see  behind the scenes. Maciek is the consummate profession in the studio, quickly and efficiently getting everything done to make the most of our time. I got a kick out of listening to him speak rapid Polish in his DJ voice as he did commercials and introduced the music that’s interspersed throughout the interview. If you’re in Poznan, you might know him as the traffic guy on WTK, a local cable TV channel. You can listen to the interview here.

I now find myself with something akin to buyer’s remorse – speakers remorse. Looking back, I wish I had answered questions differently. Maciek and I had talked a few days before the recording. He asked a lot of questions, many more than he had time for during the show, to help him put together his plan for the interview. I can now see different responses that would have been more interesting for the listeners,or maybe he was expecting a different answer. Instead Maciek got what was in my mind at the moment. Since the show is recorded, editing is possible, but limitless retakes are not. That’s the nice thing about blogging, I can always go back and change something, even after its been published!