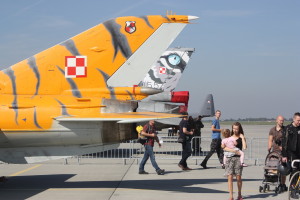 Well friends, it finally happened. After five years, I , a foreigner, visited my husband’s workplace — a Polish F-16 base. There is an annual Open House, but we’d always heard visitors had to be Polish to enter the base. Considering the fact that Ed’s supervisor must request access to the base at least 30 days in advance and hope for the best to visit him on the job, that made sense.

Word trickled down that with a written request and my passport info, I might be granted permission, so we gave it a shot. On Friday, Ed came home with a letter that was my pass. All I needed was for the guards at the gate to accept it. What do you know, they did! I was among the thousands to visit Krzesiny, a Polish F-16 base Saturday.

Polish military bases are very different than American bases. An American base is essentially a small town with housing, shopping, a gas station, schools, a child care center, medical care, fitness center and pools, restaurants, clubs, a bowling alley, movie theater, recreation and hobby centers; you get the idea. This Polish F-16 base, which is the largest unit in the Polish Air Force, has a runway, aircraft hangars, and a few office buildings. There is a new gymnasium and pool, but access is very limited even to Polish airmen and civilian employees.

The base has a long history. In 1941, Nazi Germany, built a Focke-Wulf aircraft factory and a runway at Krzesiny. In 1945, it was captured by the Soviet Air Force and years later passed to the Polish military. There are signs of the base’s past, including aircraft shelters built into mounds of earth, and a sod bunker that is now home to two falcons (used to keep birds away from the runway) and an enormous Irish Wolfhound. A sturdy cement structure remains from the Focke-Wulf engine shop. We’ve also heard that the factory structures were built deep into the ground, and that to this day, there are brand new aircraft several floors below ground level. The ground water is a little higher here than in Arizona, so those planes are now submerged in water.

Leaving the past behind, we saw a long line of planes, military and civilian and an antique car show. There were displays of military equipment and activities for kids, a marching band and a long parade of military personnel.

I knew that different nationalities salute differently; now, I know that they also have different styles of marching. The Polish version involves a lot of arm movement, across the body arm movement. They practice often and put on a good show for the crowd.

The highlight of my visit, the simulator building where Ed works, wasn’t open to the public. It was just the folks who work there with their families. It was nice to see the space and meet the people I’ve heard so much about. Leszek, the serious bicyclist, was demonstrating the ejection seat trainer. George was kind enough to show me the amazing models that he’s created of warships and tanks; all made from paper!

The was an aerial demonstration team. I hope we don’t sound jaded, but we had left the base and were on our way to lunch in a nearby village when the team took to the air. We caught glimpses of them as we were driving. As we left, I was thinking that I wouldn’t want to be in the line of traffic when it was all over. There are two gates to the base, and they are both on two lane country roads. Lunch at Eatalia was fantastic!