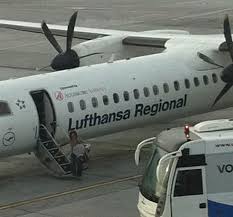 After years in Poznan, it’s difficult to limit myself to a Poznan Top 10 list. It could easily be a book. This was situation we found ourselves in recently when we had a friend visiting, and we only had one day to show him around and give him a feel for our city.

Sam is the same age as our youngest daughter, and his work as an engineer has brought him to France twice this year. The first time I was in the states and Ed went to visit him in Marseilles. The second time, he came to see us for a day in Poznan and one in Berlin.

Sam’s visit was close to being no-notice, so Ed still had to go to work. That left me the pleasure of showing Sam around town. He had a great time with my Poznan Top 10, if I do say so myself. The photo of him in front of the merchant’s houses in the Stary Rynek is still his Facebook profile pic six months later! 🙂

We left our flat a little before 10:00 AM on bikes. We rode to Ostrów Tumski or Cathedral Island. This is where Poland began so it made the perfect start for our trip. The cathedral structure that stands today, has been rebuilt over the years. Wars and fires have taken their toll and nothing remains from the original built in 968. The crypt, however, has survived and contains the bodies of Poland’s first rulers. There is a small admission price to visit the crypt, but you may wander the cathedral itself freely. Sam was raised Roman Catholic, so this gave me an opportunity to share some differences in the practices between the US and Poland. For the most part, it seems that Poland has chosen to ignore Vatican II and changes that the US embraced in 1962.

With the noon hour approaching, we wheeled our way to the Stary Rynek (translates to Old Market, but I usually think of it as the Old Square). Poznan sustained much damage in World War II, but restoration has been done very well. You feel like you’re stepping back in time. We settled into an outdoor cafe just across from the old town hall. We had a beverage and watched the goats on the big clock that come out and bump heads 12 times at noon. We also watched all of the tourist who were gathered to see the same thing. Knowing that we had a lot to do, I paid the waitress when she delivered our drinks, so we could make a quick getaway. After the goats and the call from the trumpeter in the tower, we perused the square, doing a little shopping. You’ll find lots of vendors selling the typical tourist mementos, postcards, lapel pins, toys, jewelry. After a few obligatory post cards, we visited the two for more substantial and truly Polish gift shops and purchased gifts there. I could see Sam’s engineering skills put the test as he did some very careful packing of the fancy Easter eggs he purchased for his mother and his fiance. Since he hasn’t been in touch about replacing them, I think they made the trip back to Arizona safely. 😉 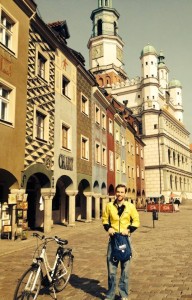 Just off the Old Square, we visited Fara (Parish) Church. In my mind one of the grandest buildings in Poznan, and one of the first you notice as you travel the city. The baroque exterior is pink and white, which led Ed and me to nickname it the Pink Church. After many years and many visits, the interior is still awe inspiring. There is an huge pipe organ in the rear. They do free mid-day concerts on Saturdays (dress warmly if you go in the winter). When you know the secret of this church, it’s even more amazing. The enormous marble blocks and pillars are all made of wood and painted to look like marble. I would have never guessed! There is another trick for the eye. From the back of the church, you’ll see a cupola above the chancel area. Walk forward and stand under it; you’ll see that it’s trompe l’oeil, painted on the ceiling to look as if there were a dome. A tour guide told me that there simply wasn’t the money in the area to do all of this with marble and a real dome in the ceiling. That wasn’t seen as a deterrent, the eye still thinks it’s all real and rich! 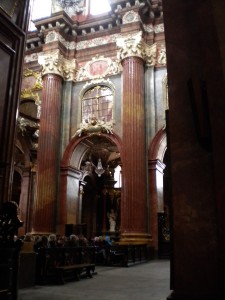 Back on our bikes; we’re off to Zamek! The castle built for Kaiser Wielhelm II in the beginning of the last century. Taken over by the Nazis, the castle was remodeled and decorated in the style of the Third Reich. A balcony was added for Hitler to review the troops, but officially, Hitler was never at the castle. The castle was damaged as the Soviets took over the city. The main tower was originally much higher. Since the war, the castle has been used by a university, served as the seat of government, and has been a cultural center since 1962. Half of the castle is still decorated as the Nazis left it, with a few items from the Kaiser’s time here and there. It’s very old, everything is very large, very masculine. The other half of the castle has been renovated with funds from Poland and the European Union. It now houses multiple, state of the art theaters. The size and shape of the stages and the audience seating can be easily changed depending on the needs of a production. This half of the castle is now topped with a glass dome. Underneath it, you’ll find a trendy cafe. The juxtaposition of the old and modern is very striking.

Just across from the castle, there are two large crosses jutting out of the bricks. A memorial to the uprising that occurred in Poznan in June of 1956. It was the first of several protests in Poland during the Communist times. The revolt had to do with the poor economy. 100,000 gathered for what was a peaceful protest. In an effort to keep this protest from spreading, a Soviet General, who was in charge of the armed forces in Poland, responded in a manner consistent with Russian standards, 10,000 troops and 400 tanks. It’s estimated that 100 people died. Hundreds were injured. Hundreds were taken into custody. Although this protest was put down violently, it’s seen as one of the turning points in ending communism. As I was telling Sam this history behind this, I had to add that this was just a few months before I was born. When I get frustrated with things in Poland, I have to remind myself that we’ve had very different histories. 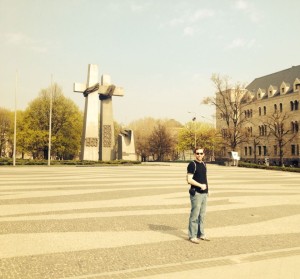 We’re half way through our Poznan Top 10 and it’s time for sport. Sam swam competitively in high school and college, so our next stop was the new aqua center at Lake Malta. We swam for a bit and Sam took in the sauna. I’ve used the sport pools, but our favorite is the wave pool, but the waves aren’t the attraction for me. It’s one of three filled with water from a warm spring on site. It water comes from the Jurassic period and is full of minerals. After our swim, it was time for a quick shower and to dress for dinner.

In the evening, we left the bikes at home and took the tram to the city center. It’s such a convenient way to get around the city and you’ll see a lot. You never know what kind of tram you’ll get in Poznan. We have some of the most modern trams and also trams that I would guess are from the time of the 1956 uprising and everything in between. Some tram stops have ticket machines. You can also buy tickets at the Ruch newsstands you’ll see around town, or in the tourists information offices. As of this writing, a 3 PLN ticket is good for 10 minutes, just validate by getting a time stamp on your ticket as you enter the tram.

We took Sam to dinner at the restaurant Ratuszova in the Stary Rynek. We sat downstairs, which is kind of cave like, with murals on the walls. After our busy day, our friend was hungry and eager to taste Polish cuisine, and try it he did — Zurek, Pierogi, and Wild Boar. The wait staff at Ratuszova all speak English, and the service is fantastic. We’ve always been happy with the food and the beautifully set white table clothes, although there are a number of restaurants that could be part of your Poznan Top 10. 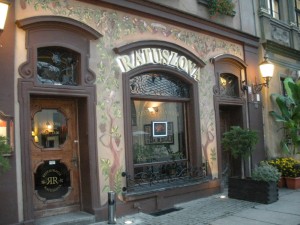 Complaining that he’d eaten too much, we took Sam to one of our favorite bars, Kriek, just off the Stary Rynek. They have an ever changing selection of Belgian beers. Besides the good beer, the owner, is one of the most hospitable people in town. This pub can easily become your personal version of Cheers! It’s very popular with the medical school students.

For our last stop, it was off to Cacao Republika. Just a block from the Stary Rynek, they serve the most thick, decadent, European style hot chocolate. It’s a cross between chocolate pudding and chocolate ganache. If you like, you can add a shot of liqueur and a huge pile of whipped cream to your chocolate. It’s the perfect end to an evening. 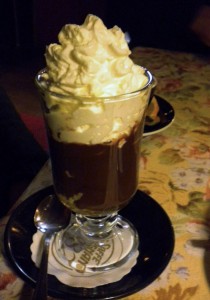 You’ve been so nice to read all the way to the end. I’ll throw in this bonus activity! It didn’t work out while Sam was here, but it’s local perspective of life in Poznan. I like to sit as close to the pitch as possible. You see the fouls and rough play that way. The crowd will provide as much entertainment as the team.

This has to be my most long-winded post, but there you have it. My Poznan Top 10 list. If I had only one day to show you the Poznan I have come to love, this is what I would want you to experience.

That’s Poznan to me. What would be your Poznan top 10?