When Ed and his two colleagues came to Poland, they spent a few days in-processing in Warsaw before they came to Poznan.  It was in one of our first skype calls from the capital city that he mentioned the “land mines” as they dubbed them.  A week or so later, I arrived in Poznan and got to see them for myself.  We’re not the only ones noticing it — an article about this is the New Poland Express last week mentions Wroclaw’s campaign to clean up the streets and the public art provided by a Polish rapper to bring attention to the subject.  It’s sinking low, but I had to track down a photo for you. It seems picking up after your dog in Poland isn’t a big deal! 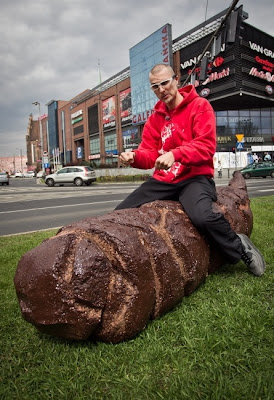 In this country of fastidiously clean and tidy people, it is not customary to pick up after your dog, and with so many people living in apartment buildings, the dogs are “let out” in public spaces.

Benson has been in Poland for a year now, and we have a beautiful, sprawling grassy area behind our apartment in which to walk him.  It’s nicely landscaped with meandering sidewalks, park benches, picnic tables, and a couple of playgrounds, and if you leave the sidewalk, you need to watch where you step.

I am not fastidiously clean and tidy.  My stateside family will be shocked to learn that I have picked up the Polish habit of washing our windows, always before Easter and maybe once or twice more during the year. But I was raised in a family where littering was unthinkable, picking up after your dog falls into that category.  Remember the Girl Scout saying, “take only memories, leave only footprints?”

We save plastic bags from produce and the supermarket, and wouldn’t think of walking our dog without taking a bag with us.  They’re kept by the door with his leash.

This spring we’ve noticed something new.  We’ve seen a couple of our neighbors also picking up after their dogs!  I feel like they’ve seen us doing it, and the light bulb has come on.  Now if they’ll just notice that he is ALWAYS on his leash.