Get more info on sightseeing in Berlin in Berlin: Insider Travel Tips! 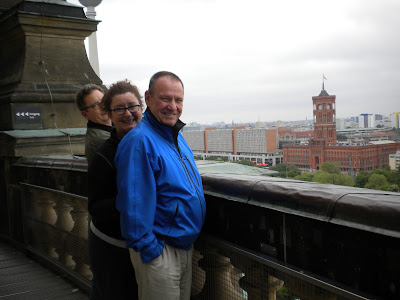 Two Fridays ago, Ed, Benson, and I drove to Berlin to pick up my mom, brother, and sister at Tegel.  My brother and sister have been to Germany before, but never in Berlin, so we spent a couple of days seeing a few of the sights.  There is so much to see in Berlin that we’ve only made a small dent in it.

Since there were five of us and we would need three hotel rooms, we did something we’ve heard friends talk about but have never tried before.  We rented an apartment for two nights for the cost of one hotel room during our stay.  While the flat and furnishings were not as nice as the place we’re renting in Poznan, it served our needs.  It was in a good location, near a subway stop and within walking distance of the Brandenburg Gate and the Holocaust Memorial.  Because we were in a residential neighborhood, we had a supermarket and little, local, non-touristy restaurants nearby (dinner for 5, 26 euro), and most importantly, we could leisurely sit around together having coffee in the morning or a few of us chatting until late into the night. 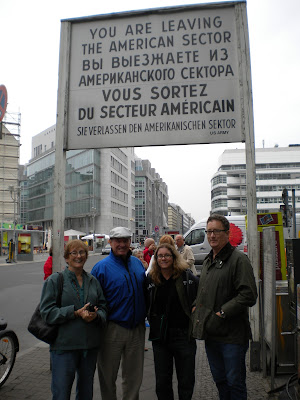 As for sightseeing in Berlin, we took a boat tour on the Spree river, visited KaDeWe, saw the Brandenburg Gate, the World Clock and some base flying from the Park Inn hotel in Alexanderplatz, visited the Berlin Cathedral during a wedding and climbed to the top of the dome, saw Checkpoint Charlie, the Holocaust Memorial and the Topography of Terror – an outdoor timeline of the Nazi years along a small, never demolished section of the Berlin Wall.

And of course we spent some time of the U-bahn and S-bahn, a big part of the Berlin experience.

Berlin is locked up tight on Sunday, so that was the perfect time to drive back to Poznan.