If you’ve driven between Wikiup and Williams, on your way to Las Vegas, you’ll remember that every few miles this sometimes mountainous, two-lane road gives one side or the other a passing lane – giving the cars and trucks a chance to safely sort themselves out.  As I’ve discovered on our road trips in Poland, its a little different here. 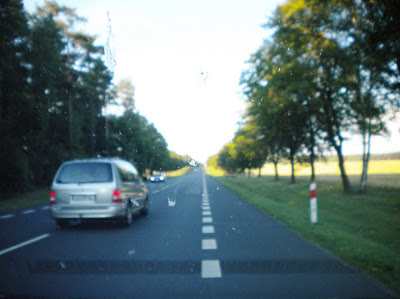 The road occasionally allows for passing, but drivers aren’t given an extra lane.  This is how it works.  If the line painted along the edge of the road is dashed rather than solid, this is an area in which passing is permitted.  Drivers in both directions are expected to move to the right, driving on the shoulder of the road, to allow those wishing to pass to drive along the center of the road – essentially turning a two lane road into three lanes.  You might have cars from both directions that wish to take the center of the road and pass, it’s first come – first served.  Something for those non-passing drivers who have moved to the right to keep in mind is that it’s not uncommon to come upon a bicycle traveling on the shoulder of these roads.  It does keep things interesting.

Sometimes in the U.S., drivers will be allowed to pass with only two lanes.  The responsibility for insuring there’s enough room to pass safely is given to the driver doing the passing.   In Poland, all of the drivers are responsible for making sure a driver passing can proceed safely.  This means you’re not only expected to move to the right, but also to slow down if a car is passing you, or coming at you head-on and it looks like they might not make it.  This is of course, the safe and humane thing to do.  I’m not suggesting that one cause an accident to prove a point regarding right-of-way, but because there is the expectation of shared responsibility in passing here, drivers pass much more aggressively – into oncoming traffic or when there really isn’t enough room to make it around.  Driving on a two-lane road takes a lot of concentration.

Another danger of two-lane roads is trucks breaking down and blocking the way.  A lot of roads here are under construction – making improvements before Poland hosts the European football champions in 2012.  More than once in my limited travels, I’ve seen a disabled truck in a construction zone back traffic up for miles.

We drove to Prague last Friday, and because of the trucks and passing, we went a bit out of our way, to make more of our trip on a four-lane highway.  It’s makes things less stressful.  Oh, and missing the speed cameras in the little villages along the smaller roads, that’s just an added benefit.