Friends of ours from Tucson are touring Eastern Europe with a community orchestra.  We were able to meet them for part of their stay in Prague.  It was the first time either of us had been in the Czech city, and we feel like we need to go back.  There’s just too much to see in a weekend.

Another impact on our sightseeing, other than the time crunch, was the fact that we had our dog, Benson, with us.  Ben had surgery a few days before and is still sporting the cone.  Normally, we’d ask a friend to watch him, but all of the friends that we might have asked were away this weekend. 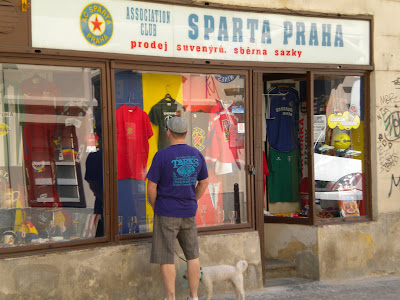 Ed and Benson felt they should pay a call to the local football club’s shop.  Sparta Praha beat Lech Poznan keeping them out of the Champions Leagues last year. 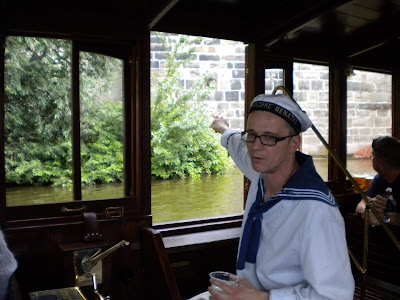 One of the things we did manage to do with Benson was take a boat tour.  There are several, ours left from the Old City side of the Charles Bridge.  You can’t miss the employees selling tickets; they’re all dressed like sailors.   The tour was about an hour and included a beverage and a snack.  It was a way to get a different view of the city and pick up a bit of the history.

The Charles Bridge, the oldest in Prague, is now a pedestrian only bridge and is home to painters, vendors and street musicians. 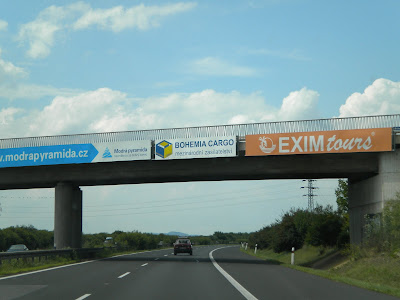 One of the things we noticed as soon as we entered the Czech Republic was advertising on highway overpasses.  Given all the talk about our dated infrastructure stateside, I wonder if we should consider this source of revenue to help with the cost of improvements.