We ate Pączki for Fat Thursday when we lived in Poland, but it wasn’t until we returned to the United States that I made my own. Like everything else, homemade is always better.

If I’m perfectly honest, I couldn’t understand the fuss about store-bought Pączki. It’s probably because I was, based on the appearance, expecting an American doughnut.

I found the pastry itself too dense and bread-y and the jam too scant. Now that I’ve had homemade, I know that all of you who have enjoyed mama’s or babcia’s paczki were holding out on me! 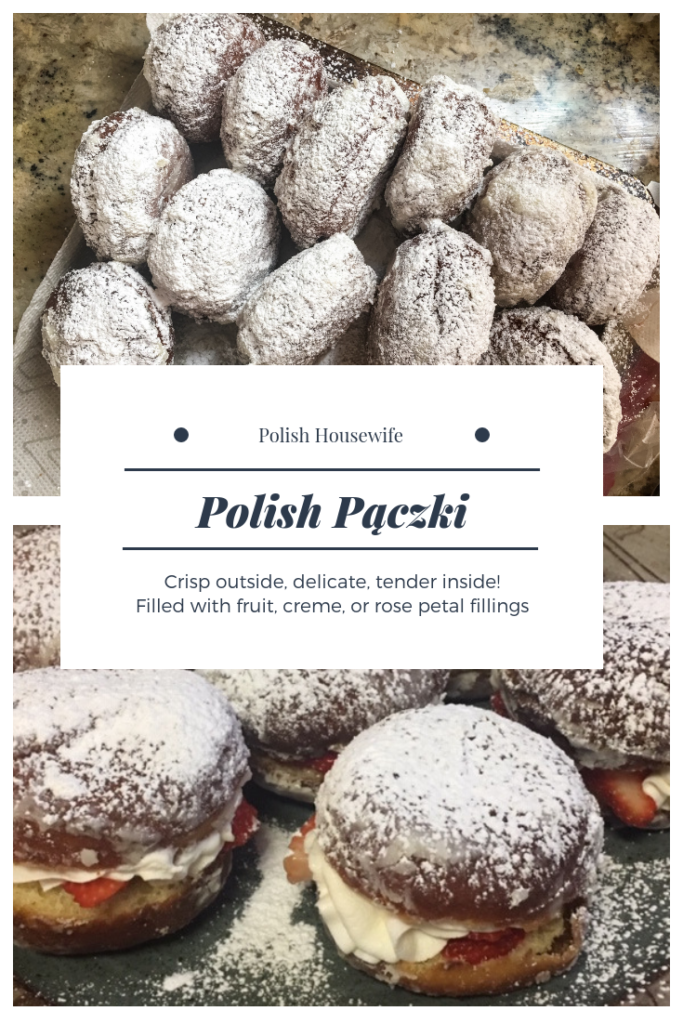 Did you think I made a mistake above when I said Fat Thursday? While in the United States and many other countries, we mark the day before Ash Wednesday as Fat Tuesday, a day to use up the oil in the house, so traditional foods for this day are fried, before we start the penitential time of Lent and six weeks of plain simple foods.

In Poland, the day to eat fried treats in preparation for Lent is the Thursday before Ash Wednesday, and on Fat Thursday, Poles will eat 100 million paczki!

It’s not just a matter of tradition, good luck is involved! According to culture.pl, a Polish proverb proclaims that

those who don’t eat a stack of pączki on Fat Thursday will have an empty barn and their field destroyed by mice. 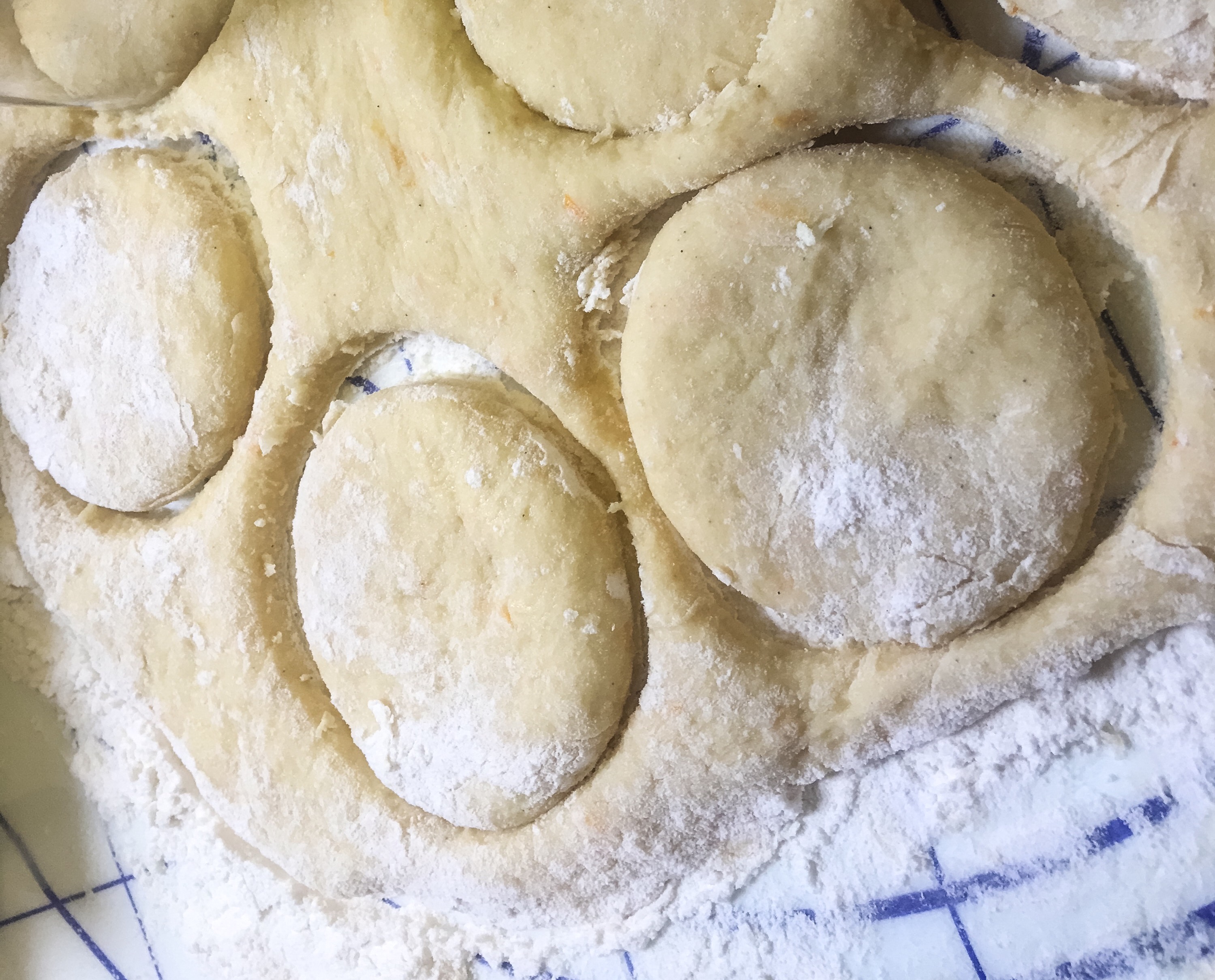 My own Paczki? The outside is crisp; the dough is rich and delicate, like an orange-scented brioche.

The jam, in my case orange marmalade, really is just an accent. As I said, homemade is always better! So with the last week of Karnawal approaching, let me urge you to make your own paczki for Fat Thursday (or Tuesday). 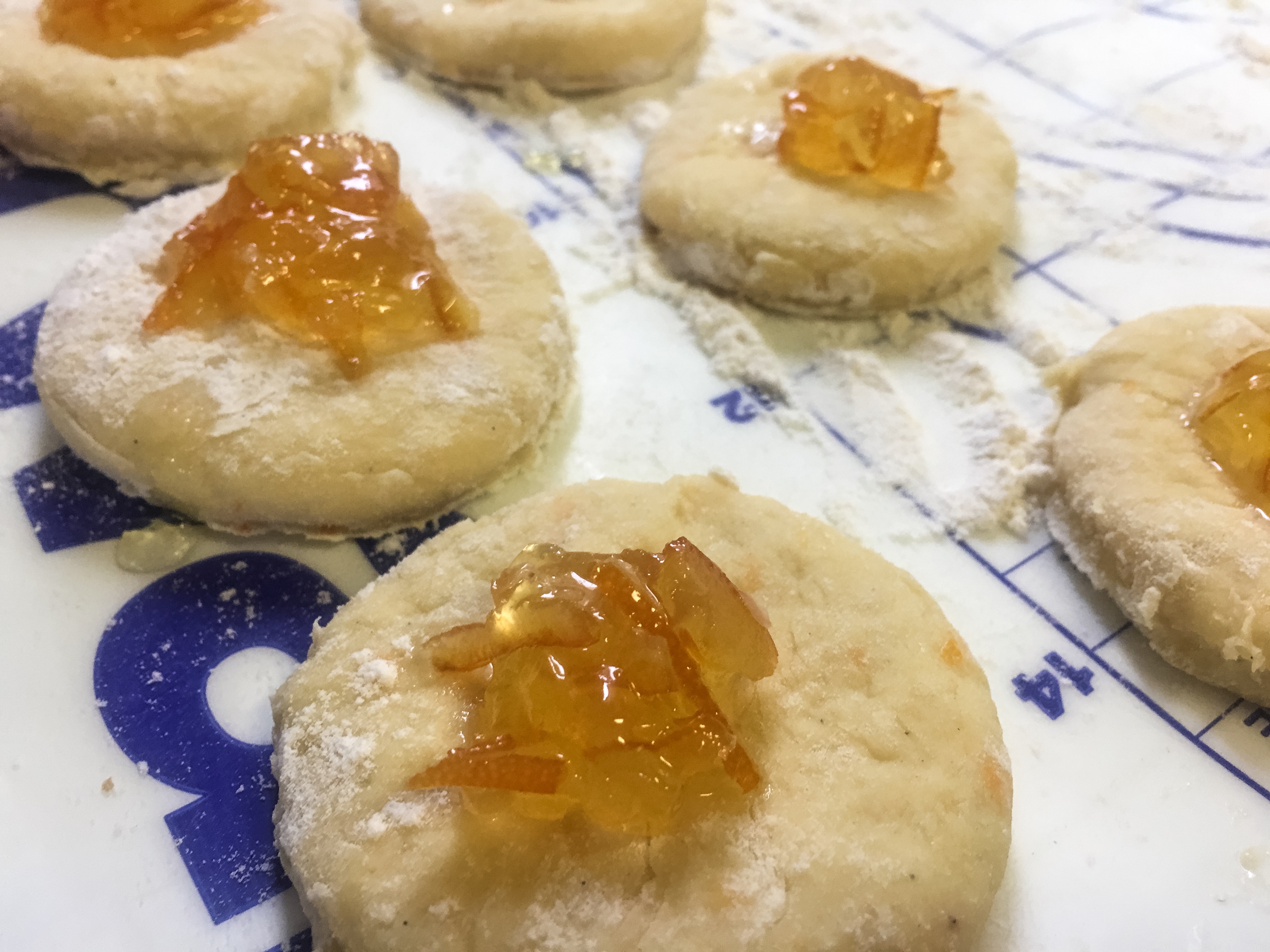 Traditionally, lard is used to cook the pre-Lenten treat. The idea behind this and other fried goodies this time of year was to use up the oil in the house because Lent would mean six weeks without fried foods and other rich meals.

It’s a little ironic that now there is interest in baking pączki, and more recently air-frying pączki. In the name of science, I tried all three cooking methods with my most recent batch.

The pączki above are from left to right: fried in lard, baked, air-fried. Here are our thoughts on the three versions.

Fried – this was our favorite for taste and texture. There was a light crispness to the outside, and the lard adds another flavor note.

Baked – baking is by far the easiest method; it also had the most rise. Put a bunch on a baking sheet and give them 8 minutes in a 375° oven. I didn’t even bother to turn them over midway through baking. There was no oil mess to clean up. They were light and tender.

Air-fried – Our air-fryer is on the small side. I was able to cook two at a time at 350° for about 8 minutes, turning them over halfway through. I lined the bottom of the basket with parchment and placed the dough on the paper before starting the air-fryer. When I checked them halfway through the cooking time, the tops were beginning to brown and the bottom still looked raw, so turning them seemed to be necessary. This wasn’t as simple as oven baking, but the final product was equally light and tender.

While the baked and air-fried are not in keeping with tradition, they still yield delicious pastry. 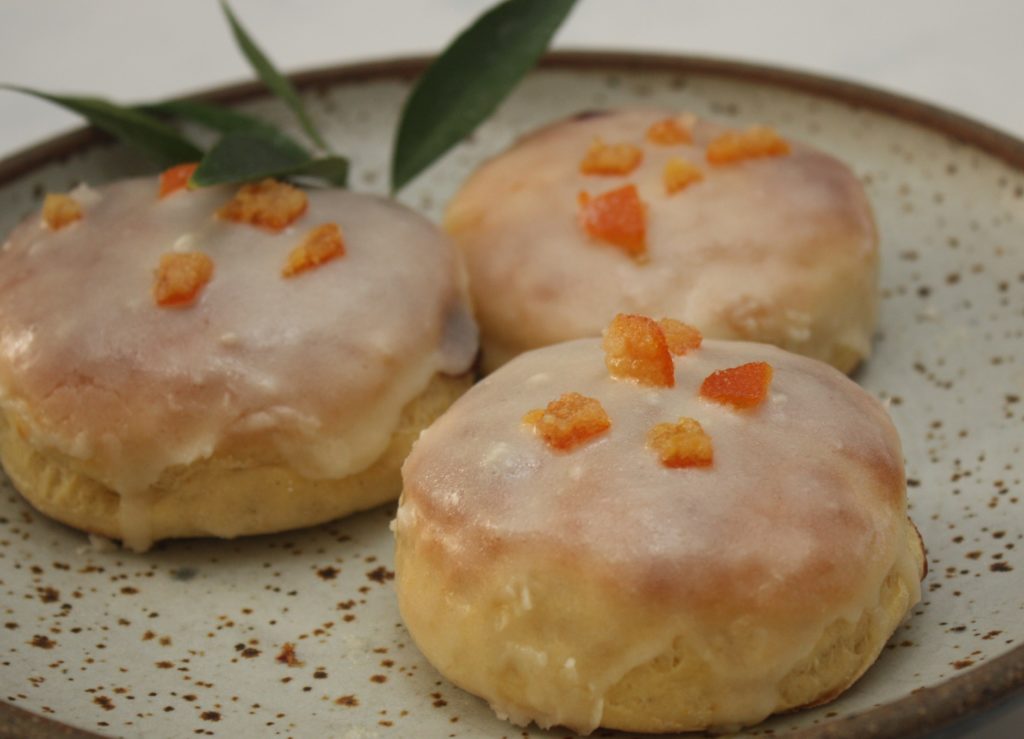 An old recipe for pączki

Although I’ve doubled the flour used, I’ve used the recipe from Polish Cookery, the translation of Uniwersalna Ksiazka Kucharska (the Universal Cookbook, published in the early 1900s) by Marja Ochorowica-Monatowa, which bills itself as Poland’s best-selling cookbook adapted for American kitchens.

This was the first of my many Polish cookbooks. It’s translated and adapted by Jean Karsavina, originally published in 1958. I have to agree wholeheartedly with Ms. Karsavina’s remarks in the preface:

Poland, like France, is a country where people really know food. One can stop at a peasant home in the country, a wayside inn, a modest restaurant in a working-class neighborhood, and be served a meal with remembering. Good food is tradition. Polish hospitality is legendary.

Gone from the original book in Polish are the recipes for Roast Boar’s Head and Turkey Garnished with Two Dozen Roast Field Thrushes, and the original author’s assertion that the book’s purpose was to “give brides a knowledge of how cooking is done, so that they may supervise the servants properly.”

This was essential, Ms. Montowa says because, “everyone knows how apt servants are to cheat, especially if the lady of the house makes no attempt to interest herself in planning menus or fails to check bills and accounts. If,” she tells us, “there is time on one’s schedule for singing lessons, piano practice, water coloring, and fine embroidery, surely there is also a half-hour each day which can be made available for one’s housewifely duties. . .”

It’s a long way from my great-grandmother who was raising 10 children, homesteading with her cattle-ranching husband in the Arizona Territory at the time. 😉 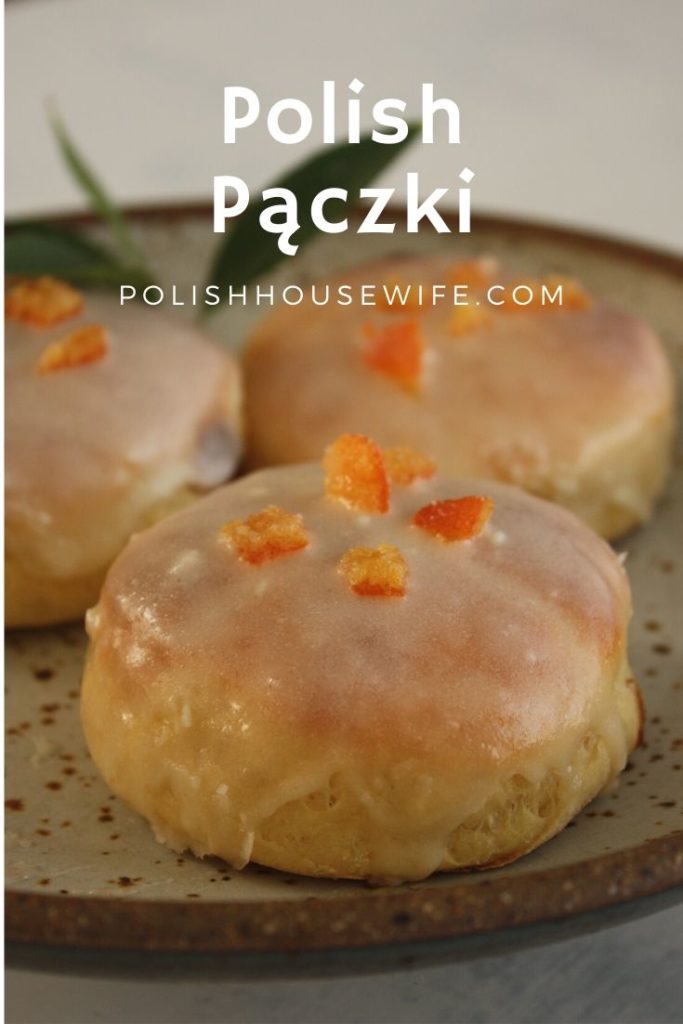 Whether you are supervising the staff or making your own pastry in homage to pioneer ancestors, I hope you’ll give Paczki for Fat Thursday a try this year, especially if you’ve never had homemade.

Give Karnawal a good send-off. My friend Klaudia tells me the nicest and most traditional jam to use it a rose jam, but you can certainly use other fruit jams or marmalade.

Check out my recipe for Angel Wings  another favorite fried food for Fat Thursday. 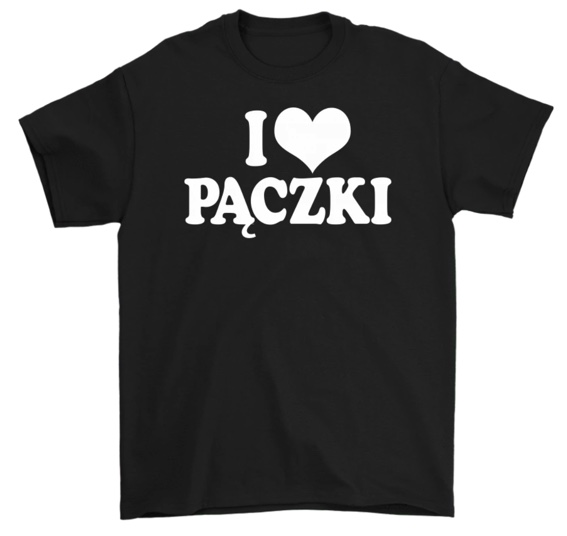 I love paczki – click on the photo to buy the shirt from the Polish Shirt Store!

A brioche-like, jam filled pastry eaten to mark the last week before Lent

This cookbook layers the jam between two cutouts. If you have a long pastry tip, you could also pipe jam into paczki after frying, or slice your plain paczki and filled with whipped cream and berries, or glaze and top with candied citrus peel. I used this recipe to candy the peel from tangerine picked from our tree and this glaze by dipping warm pastry. I liked that the glaze was less messy to eat than powdered sugar. 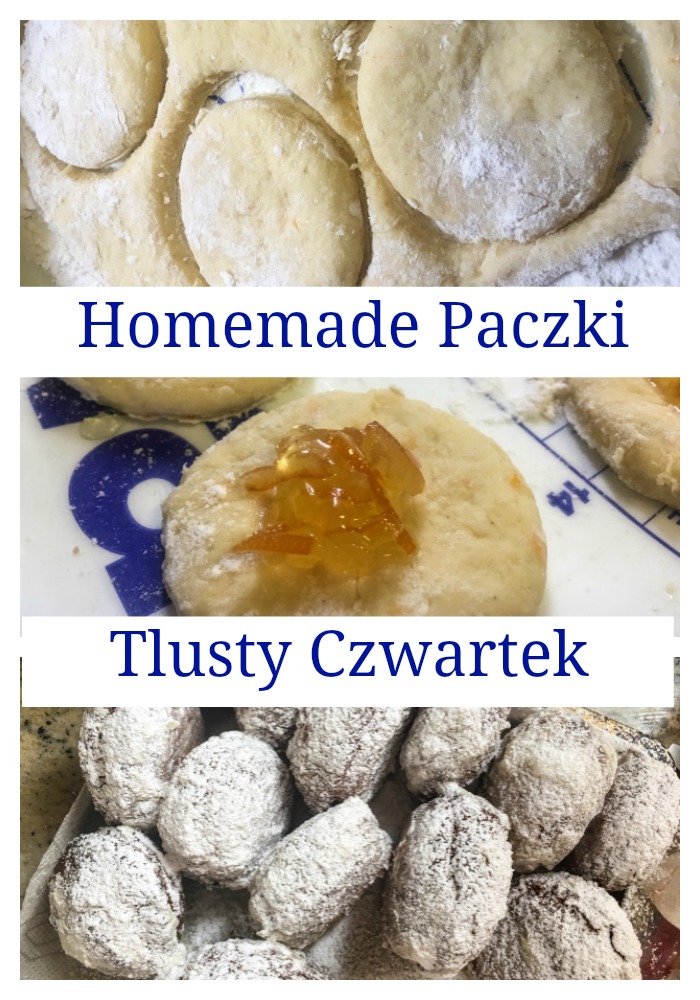