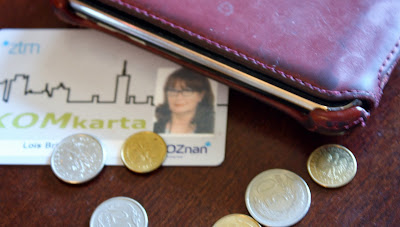 It’s time to renew our tram passes again. We’ve been riding our bikes so much and using them for many commutes into the city center that I’ve thought about not buying a monthly pass and just keeping a few single ride tickets in my wallet for the occasions when we do hop on a tram, but the weather is changing. Biking everywhere won’t be as pleasant now that it’s getting cooler and wetter. Fall is definitely here. We’re adding a second blanket to the bed and our friends in Arizona are excited that there are no temperatures over 100 (38 C) in the forecast. Yep, summer is over.

Even if it isn’t more cost effective to buy the monthly pass, for us, it’s worth it because of the convenience. When I’m using single tickets, I find that I’ve always just run out of tickets when I’m in a hurry and don’t have time to buy one. Many of the little shops near us used to carry them but no longer. This is a common complaint in Poznan because the mark up is so small, and I don’t picture them leading to much in the way of additional purchases for retailers, not a good loss-leader.

When we met with a journalist from the local paper earlier this year, she remarked on the fact that I was so fond of the tram system when the locals and her newspaper have been complaining about it. Fares have increased a lot since I arrived in Poznan.  I think we’ve seen at least two increases this year, maybe three, and not small ones either – along the line of 10% each time.

We don’t have the population density in most American cities to make public transportation practical. I do enjoy being in a city with an effective system, but that doesn’t mean it’s perfect. Ed’s actually out running errands now and just called to say that he hasn’t been able to renew his pass or buy a ticket because the two machines he’s found are both out of service. I’ve almost come to expect this and feel somewhat elated when I find one that works. So he’s hoping to get on one of the new trams that will have a ticket machine on-board.

There an app for smart phones that allows you to buy tram tickets. A friend told us about it last year, but we have Americna iTunes accounts so it wasn’t available to us. I just read in the Gazeta about a student who had used this app to purchase his ticket. When an inspector asked to see his ticket, he refused to accept the ticket shown on the app because it couldn’t be verified. (You just read it the same way you would a validated paper ticket.) So the student was cited, and told to go to the transportation office to straighten it out. The office staff didn’t even realize that it was possible to purchase tickets with an app. They suggested he pay the fine and write an appeal. Another staff member suggested he pay the fine and then to the newspaper for help. Fortunately, the Gazeta was able to resolve the issue. (A welcome to Poland moment.)

Our daughter, Lauren, visited earlier this year. It was her first time to ride the Poznan trams. She said, and I have to agree, if a ride on the Phoenix light rail was as rough as a Poznan tram, someone would be losing their job – maybe the driver, maybe person in charge of transportation, maybe the mayor. Old tracks and trams surely play a part in the rough ride that is so common here, but the operator technique has a lot to do with it. Why is it that when the next stop is just a hundred yards ahead, drivers will accelerate, just to slam on the brakes when they get to the stop? Sometimes, it feels like a game of crack the whip as they speed up when there’s a little jink in the track. It’s embarrassing when you all but fall in someone’s lap even, and it’s not because you weren’t holding on. It makes me wonder if the schedules are unrealistic. Are they driving like this to stay on time?

During Ed’s first year here, he and his colleagues had dinner at a tram driver’s house. It was arranged by mutual friend, Rev. Bob Gamble. Bob was a long time friend of the tram driver, who was also a glider pilot. With his interest in aviation, Bob knew the tram driver would enjoy meeting his new American friends. There was lots of flying talk that night, and they guys learned that tram drivers refer to their job as “riding the bull.” It worked out that the guys were able to get the tram driver into the F-16simulator, and I heard that he really enjoyed it.