Metrowiec or meter-long cake, a reader asked if I had a recipe. I’d never heard of it. A quick google search and I knew I wanted to make it. Metrowiec is so visually striking that I was hooked at first glance.

The appearance with vertical stripes of chocolate and white cake with layers of filling in between was also mind-boggling. How did they do that? 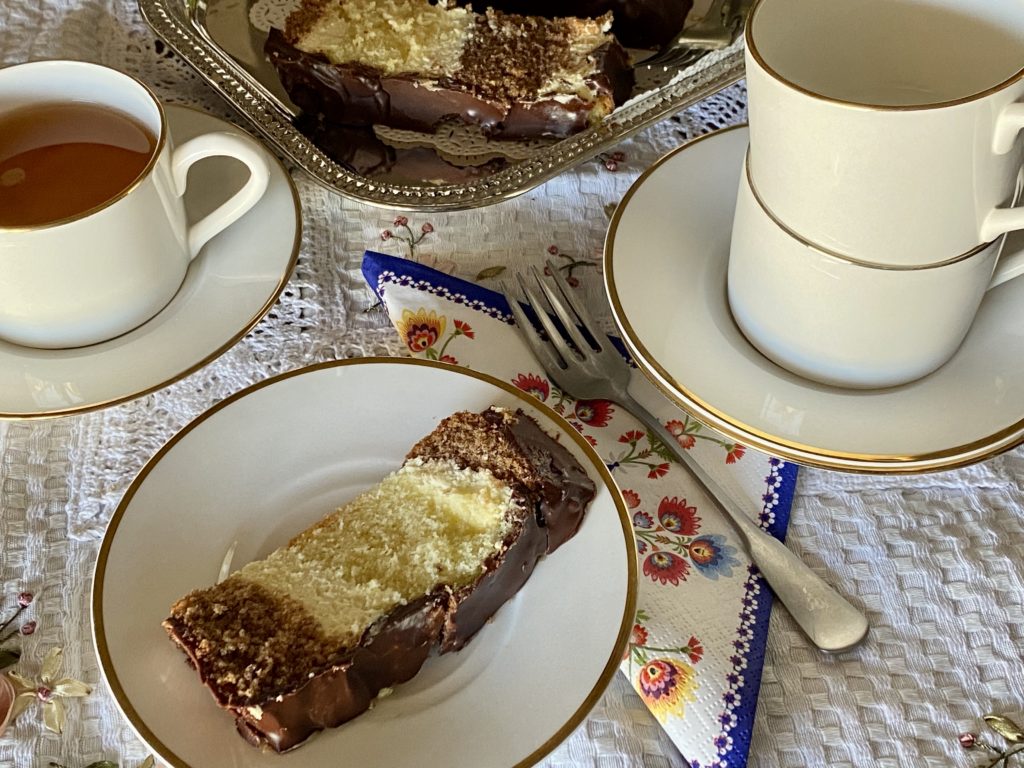 In case you are also not familiar, let me explain the process. You bake two chiffon cakes That means the cakes use baking powder for leavening and the fat is oil rather than a solid like butter or shortening, and they don’t use a lot of flour. Chiffon cakes tend to have a flat-ish top, and a light delicate texture. 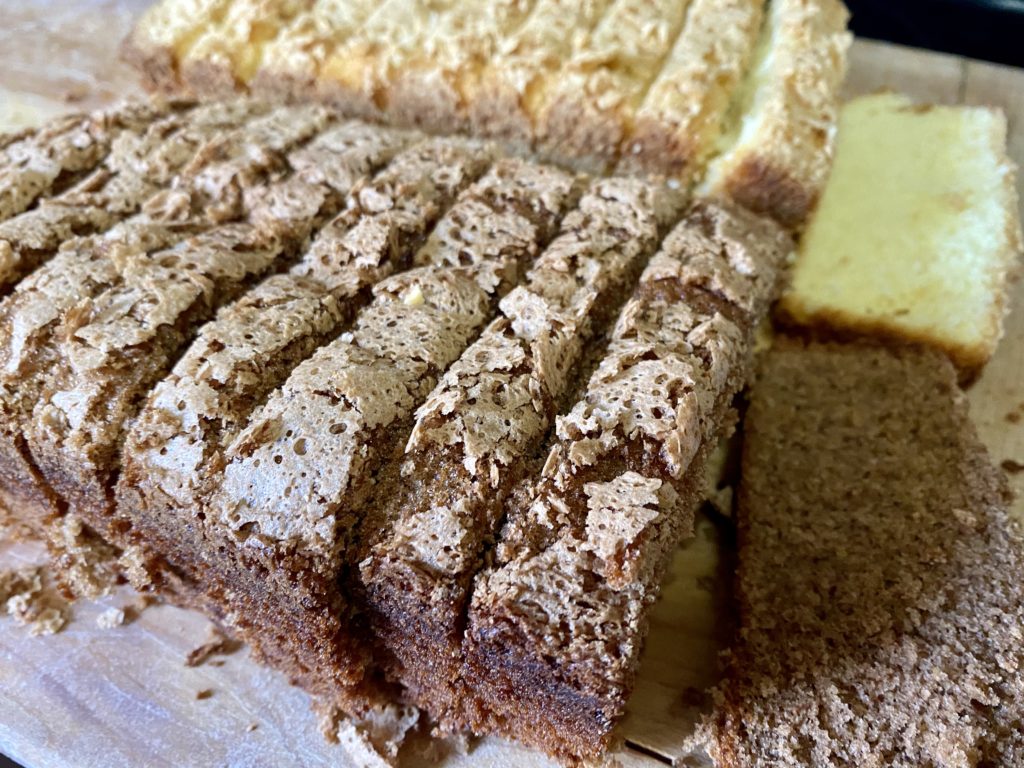 One cake is white and one is chocolate. They’re baked in loaf pans. When your cakes are cool, you slice them into slices that are just less than an inch thick. You make vanilla pudding, almost like pastry cream, but you’re using corn starch (or potato starch) rather than flour. When the pudding is cool, you beat it into whipped butter. This becomes the filling between the layers. 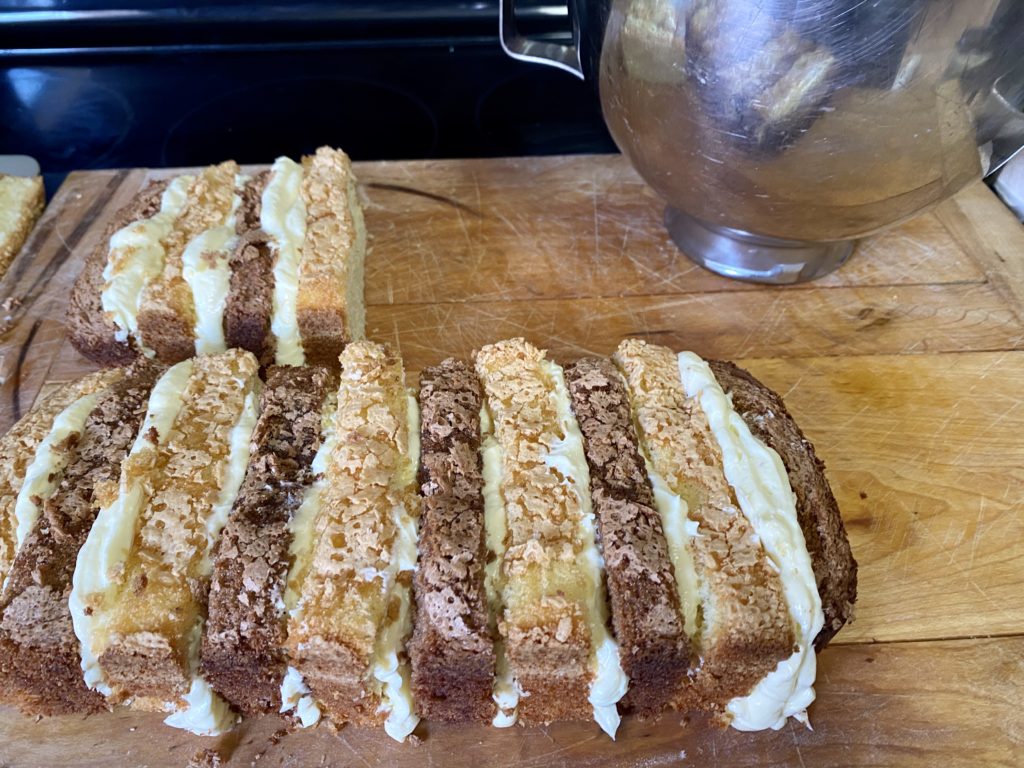 As you frost (with the pudding) you alternate the layers, white, filling, chocolate, filling, white, etc. You could assemble this into one very long (almost meter-long) cake, but most people make two loaves unless you have a very long tray and room for the tray in your fridge. 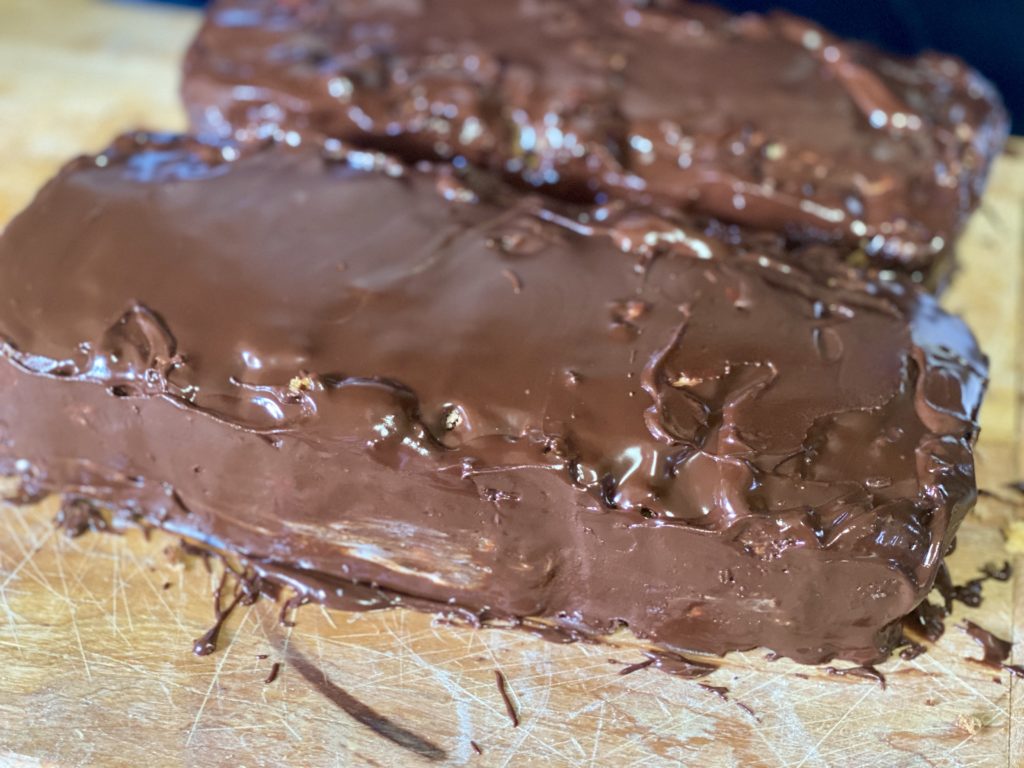 Don’t worry if this is a little messy. The hero shot of this cake will always be sliced rather than the whole. That’s where the visual interest lies.

These zebra-like loaves are then enrobed in chocolate. What could be better? The tricky part comes in here. When you’re ready to serve, slice on the diagonal, making sure you’re getting three slices in your diagonal cut. That’s how they get the vertical stripes. Mystery solved.

I did read that someone did the initial cake slicing on the diagonal and assembled alternating slices with cream in between, so when she sliced the finished product, she could slice straight across and still get a mix of colors.

I also read that the cake freezes well, and we’re testing that idea. With no dinner parties currently in our future, I wrapped up slices for my parents and for Ed’s co-workers when he’s back in the office later this week. They’re waiting in the freezer for a convenient delivery date, so I hope that comment was true.

This may be my favorite Polish cake. It’s pretty, not overly complicated. I baked the cakes one evening, wrapping the cooled cakes in plastic wrap until I was ready for them. I have two loaf pans, but they’re different sizes, so I had to bake one at a time. I made the filling and assembled the next morning. I think it was easier to slice the delicate cakes because they had a good long rest after baking. You’ll want to slice with a serrated knife.

I mention using an offset spatula to spread the chocolate icing on the sides of the cake. You can certainly make this without an offset spatula, but it’s a tool I recommend you add to your kitchen if you don’t have one. They’re just so handy, and I’m not big on kitchen gadgets. If you think about it, bricklayers use a trowel for a reason. That bend makes the job easier.

This recipe is based on two Polish food blogs Moje Wypieki and Domowe Wypieki.

Polish Housewife participates in the Amazon Associates program. Your purchases via Amazon links on this page generate a commission for me at no additional cost to you.

I’ve written the recipe below with the usual process for making chiffon cakes. That’s not what I actually did. Years ago, my daughter and I were selling biscotti at a farmer’s market. Ours were lighter than the usual biscotti. You wouldn’t break a tooth on them. The difference was that in the initial creaming of butter, sugar, and eggs, we worked a lot of air into the mixture. We turned the Kitchen Aid on high and let it run for 5 – 10 minutes. Our end product, twice baked, was lighter than the norm. I tried that process here.

I didn’t separate the eggs. I mixed whole eggs with the sugar and whipped them until they were light and fluffy, almost white in color. Then I added the remaining ingredients, the oil, and water first, then the dry ingredients. It makes a runny batter. The resulting cake was still very delicate and light. If we we made both versions and put them side by side, there might be a slight difference in texture, but there was nothing disappointing about my outcome with this shortcut. Yes, I guess I’m a little lazy and will avoid separating eggs if I don’t have to.

I hope I’ve convinced you to give Metrowiec a try! 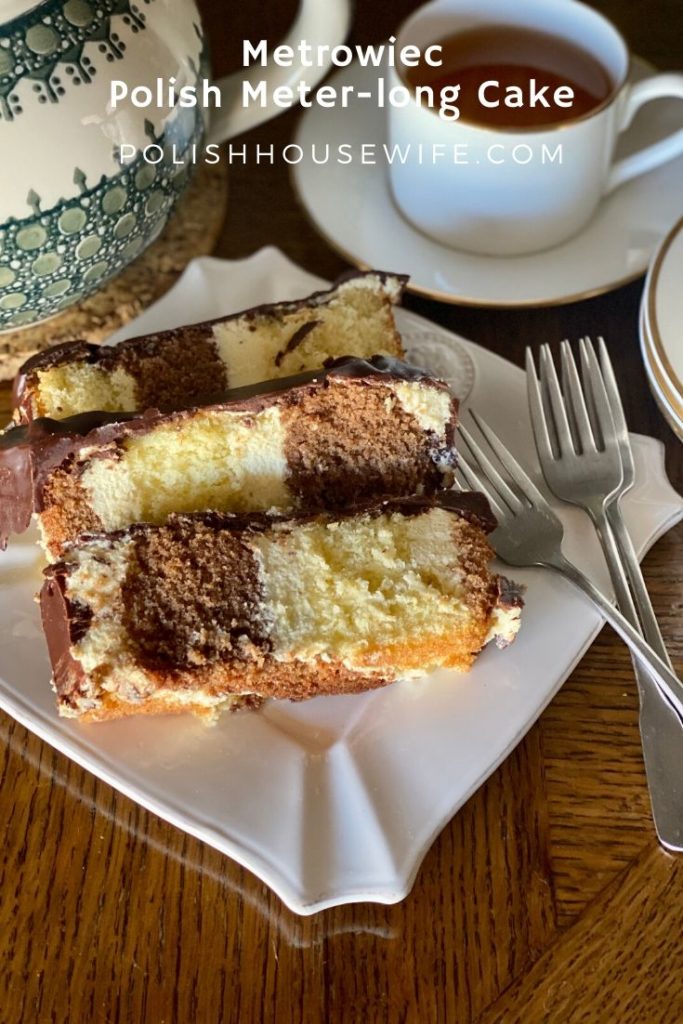 Metrowiec alternates, delicate layers of light and dark chiffon cake with a creamy vanilla filling and finished with a chocolate coating.

for the light cake:

An alternative chocolate topping: Combine all the ingredients, pour over the top, spreading on the sides with an offset spatula. 10 tablespoons butter, melted, 10 tablespoons cocoa, 11 1/2 cups powdered sugar, 5-6 tablespoons of milk