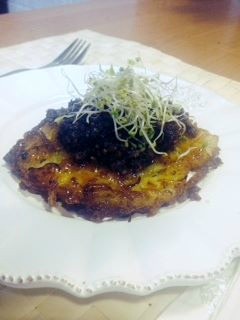 This black sausage on a potato and sauerkraut pancake is so traditionally Polish. The fact that the pancake is glazed with chutney adds a modern twist and for me, totally makes the dish. I must give full credit to a new friend and Poznan chef, the creative genius behind Kuchnia Chrisa: bo kuchnia jest sztuka. For those of you who don’t speak Polish or spend less time on Google translate than I do, it means Chris’ Kitchen: because the kitchen is art.

You never know where you’ll pick up a new recipe. We joined another expat friend for a drink last Friday at The Voyager Wine Club, a local wine bar (thanks for the suggestion, Yana). We happened to be there, during the filming of a short documentary on the eastern expansion of the European Union. It’s been 10 years since Poland joined the EU. A camera crew had spent a couple of days following Chris around Poznan, to tell the story of a German national who has moved east to live and work. They had us sign a release and went about filming as we sampled two of Chris’ dishes and he chatted with patrons.

We spoke with Chris at length about this dish and kaszanka. Kaszanka is a black or blood sausage made with pork, blood, barley or buckwheat, and spices. Chris buys his sausage from Marek at the Organic Market at Plac Bernardynski just like our friend Norbert (who has taken us shopping at this market). He offered to meet us at the market on Saturday morning and introduce us to Marek because they were planning to film some outdoor shots at the market. We sampled many of Marek’s goat’s milk cheeses and bought some kaszanka and chorizo. 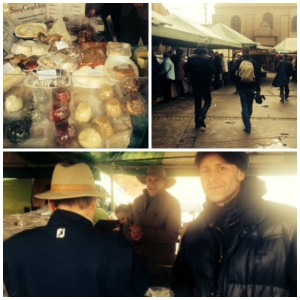 In addition to providing the culinary side of the wine bar, which includes a once-a-month four course meal, Chris takes people on culinary tours of Poznan and the Wielkopolskie region – just the thing for any foodies vacationing in Poland!

On it’s own, I find kaszanka a little on the bland side. I prefer sausages with a lot of garlic and a smokey flavor, but in this application, it was brilliant. For me, dining out is ideally a source of inspiration for my cooking at home. I had to try making these. I added a few things to my usual potato pancake recipe and made nine 6-inch pancakes. Ed wanted to take some to his office the next day, so we cut the pancakes into fourths to make them finger food. I think making the pancakes small, maybe 2 inches, would make for a terrific canape. The larger size is perfect for a modern Polish or MoPo first course.

PS – I’m sorry to say that our friend Chris has passed away. He was such a dear, young man and we cherish his memory.

Traditional Polish, made modern with chutney!