Poznan has a long history hosting international trade fairs. Kielce, south and east of us, is also getting in on the business. Ed has been there this week for a military equipment trade fair. Lockheed Martin is marketing a new training jet, and he’s been with a team from the states offering demos in the simulator. I’ve read that Kielce’s exhibition hall is the most modern in Poland, but it seems like the event would have made more sense in Poznan. Everyone (other than the few living in Poland) flew into Warsaw and had a three hour drive to get to the town, and the hospitality industry in Kielce, a city of 200,000 didn’t offer many choices for lodging or dining.

Kielce is in the middle of Polish “castle country.” The city came with warnings from Polish Air Force friends about the area being rougher than Poznan, and Trip Advisor mentioned very little in the things to do category, so I didn’t tag along. I can tell you, however, what Ed has found. 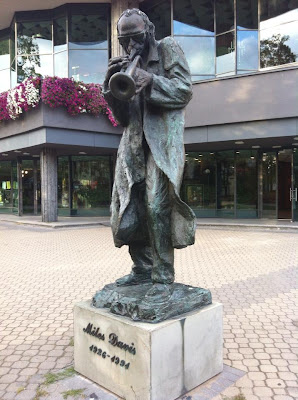 There is a statue of jazz great, Miles Davis, outside the cultural center. Somehow, Trip Advisor has missed this. This statue in Poland existed long before the one currently being planned for Davis’ birthplace.

For a small city, Kielce also has two fantastic Spanish restaurants, owned by the same family. One is more elegant, white table clothes, etc., the second a more informal tapas place. I think Ed has dined in one of these restaurants every night. They’re very popular. If you want to eat in the fancy one, make a reservation.

I’m catching the express train tomorrow to meet Ed in Warszawa. I’ve been reading online about Poland’s first Michelin starred restaurant (as of this year), so we’re hoping we can get a table. We’re still waiting to hear back from them. Lest you think we’re crazy, making the trip on the hope of a reservation, the restaurant is not the reason for our weekend near the capital. Ed has a golf lesson with a “stack and tilt” style teacher. That’s the real reason.

PS – in case you’re wondering, 2 days is not enough notice for Poland’s only Michelin starred restaurant. They need at least 10 days. We’ll be dining at Butchery and Wine, a Michelin best value restaurant.