Making liqueurs is a national pastime in Poland. When fruits are in season during the summer, everyone (from grandma on the farm to the 30-something foodie in the city) is putting up cordials to be consumed when temperatures begin to drop. When we were packing our bags to move back to the United States last December, two friends brought us bottles to slip into our luggage — one cherry, the other white plum! Five months later, those gifts are just a fond memory. One that I’m glad we were able to share with stateside friends and family. 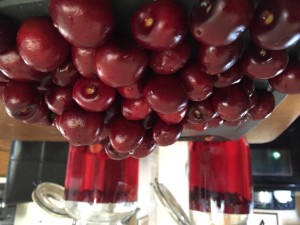 Cherries are are starting to make an appearance in our supermarkets, so it’s been time to re-supply, making a big batch for special occasions to come. You can bet that we’ll be on the lookout for white plums too. We fell in love with white plum jam in France last summer. When I mentioned this use for white plums to a Polish friend who had lived in France, she suggested that while jam was fine, a cordial made with white plums was much better. She was right! 😉 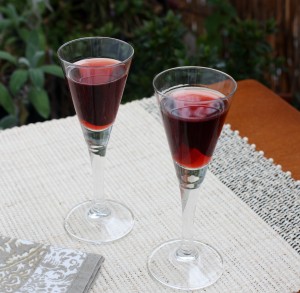 Having made my own cherry liqueur when we lived in Poland, I was inspired by local chefs who are turning out housemade flavored moonshines. Using my basic technique, I copied their flavors and cocktails. Blueberry lemonade or apple pie ginger beer, anyone?

In thinking back about making infused vodkas, I must share a cultural difference. When I was home the first time after moving to Poland, I ordered a drink at our local brewpub, it was an Arnold Palmer (iced tea and lemonade) spiked with vodka infused with some sort of Jolly Rancher (a fruit flavored candy, that tastes so bad that I’m surprised that they’re still in business). I was disappointed in the cocktail and told a bartender friend about it when I returned to Poland. I said that I wantedy to try making it with a better tasting fruit candy, maybe skittles or starburst. The young man looked at me as if to say, no, silly woman, and then shared this Polish wisdom “make it with real fruit; it will be beautiful.”

I hope I’ve inspired you to try making your own flavored vodkas. Nothing makes a guest feel more honored than when you pull out a bottle of a homemade liqueur.